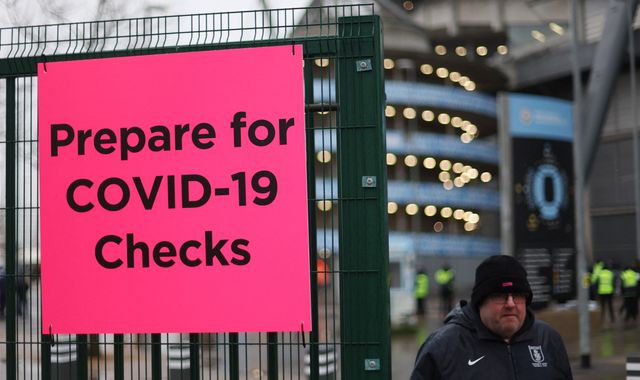 There were 113,628 infections confirmed on 25 December after a rush to get tested in the days prior.

The government’s dashboard had not been updated with new figures since Christmas Eve, and the newest data is not UK-wide. It does not yet include any data for Scotland and Northern Ireland.

The dashboard was updated as New Year’s Eve plans in England were given the green light, with Sajid Javid confirming the government will not be imposing any further restrictions before the start of 2022.

However, the health secretary said people should “remain cautious” when taking part in New Year’s celebrations – and take a lateral flow test before attending events.

Separately, Scotland has recorded the highest number of daily COVID-19 cases since the start of the pandemic, early data suggests.

It’s worth noting that a lag in reporting means the majority of these cases will relate to tests done before the Christmas break.

First Minister Nicola Sturgeon said the expected steep rise in cases is now “materialising” and she believes numbers will “rise further in the days ahead”.

Meanwhile, there have been 45,307 cases of the new Omicron variant reported across the UK, the UK Health Security Agency (UKHSA) said.

It brings the total confirmed cases of the variant in the UK to 159,932.

However, the total – released on Monday – does not include any information for Scotland and Northern Ireland which have not reported data for Omicron cases since December 23.

The number of deaths in England of people with the Omicron variant has risen to 39, according to the UKHSA.

Hospital admissions in England for people with confirmed or suspected Omicron rose to 407.

On 25 and 26 December, 33,462 people in England and Northern Ireland received a booster vaccine – there is no update yet for vaccination data for Scotland and Wales.

Hospital admissions are rising, but not “going up in an exponential way”, the chief executive of NHS providers has said.

While the number of people in hospital with COVID-19 in England has reached its highest level since March, Chris Hopson told Sky News earlier, there are some early signs that this wave will not be as bad as last January.

However, new post-Christmas restrictions have been deployed in other parts of the UK.

In Northern Ireland there is a limit of six people – or 10 from a single household – gathering in indoor hospitality settings, with people are “strongly recommended” to reduce inter-household mixing to three households.

In Scotland, nightclubs have been forced to shut their doors while only table service is allowed in places that serve alcohol.

Wales has also closed nightclubs and only six people are allowed to meet in pubs and restaurants. Indoor events have also been capped to 30 people, with outdoor events limited to 50.

England is currently following Plan B, which includes guidance to work from home, mask-wearing in shops and other public settings and COVID-19 passes are needed to gain entry to some large events.

Mr Johnson is under pressure from some of his own MPs to resist further measures.