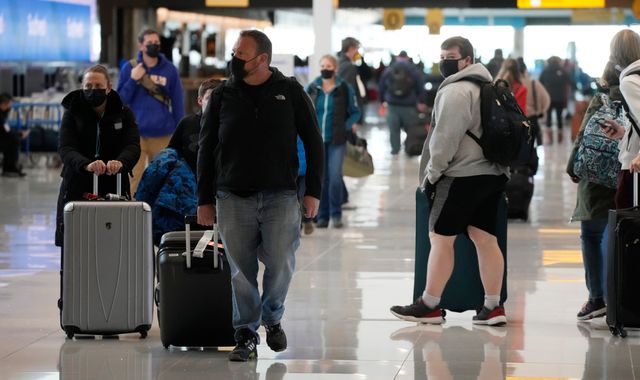 Staff shortages caused by COVID are contributing to severe travel disruption over the Christmas period.

Several rail services have been disrupted due to staff going down ill with coronavirus, while planned closures and industrial action are also having an impact.

East Midlands Railway services have been by industrial action by the RMT union, and a number of routes by planned engineering works.

London’s Tube network is also not running at its normal capacity, with the Piccadilly line shut down between Heathrow and Acton Town until 30 December.

Those who are heading to Heathrow may notice some flights suffering cancellations or delays.

Nearly 2,300 flights were cancelled on Monday, with most airports affected being in China or the US, according to the flight-tracking website FlightAware.com.

There were also 45 cancellations for British Airways, having called off 50 flights at Heathrow on Sunday due to “operational constraints”.

Gatwick said it had only three cancellations out of 215 flights on Sunday, and none on Monday.

Around 8,000 flights were cancelled worldwide between Christmas Eve and Boxing Day – approximately 3,000 of which were due to go to or from the US.

The Christmas holidays are typically the peak period for travel, but the past two years have been heavily impacted by COVID-19 around the world.

Last year, the UK was under heavy restrictions. This year, people have been able to travel freely, but many have been forced into isolation – or have been acting more cautiously – due to the rise of the Omicron variant.

Despite that, National Rail said 95% of Britain’s rail network would remain open over the festive period. It said 370 engineering projects being carried out over Christmas were planned “months, and in some cases years, in advance”.

More staff absences could be on the cards in the coming days and weeks due to the potential impact of families and friends mixing.

In the NHS, the chair of health care and workforce modelling at London Southbank University said as much as 40% of the capital’s workforce could be absent under her “worst-case scenario” workings.

Professor Alison Leary told BBC Radio 4’s World At One programme: “The NHS is in a fairly fragile state in terms of workforce anyway – that’s fairly well documented – and the increased absence rate due to Covid and Omicron in particular are putting a lot more strain on the system.

“Christmas Eve is the last data we have, there is more data due out today, but, essentially, London’s absence rate is up by about 30%, depending on the organisation.

“That’s not just people off sick with COVID, but also people isolating because of positive tests.”