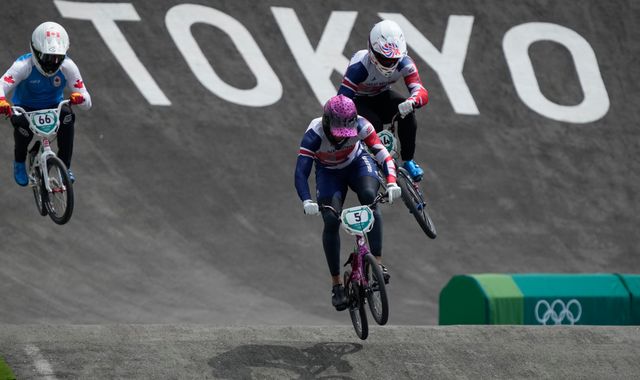 If you didn’t get hooked in by the pulsating races on the track then the new freestyle competition provided some simply breathtaking stunts that led to British medals in every one of the BMX competitions.

Bethany Shriever raced to the gold medal shortly after Kye Whyte had won silver in the men’s competition.

In the new freestyle event Charlotte Worthington pulled off a trick never really seen before to win gold and Declan Brooks took bronze.

“It’s been unreal,” Whyte told Sky News as he reflected on a year that has changed all of their lives – the south Londoner is known to many now as the “Prince of Peckham”.

“It was a big buzz for BMX… the reaction we got from it was way more than I expected,” the 22-year-old said.

As the younger, edgier cousin of track cycling, BMX was already on the up – now it has four role models who have inspired people young and old to have a ride.

British Cycling say that while the pandemic and lockdowns significantly hit participation – it is now surging again in many parts of the country.

The Junction 4 Skatepark in Blackburn has doubled the number of sessions for under 12s and is recruiting extra coaches.

Hayes Hawks BMX in west London have seen record membership levels and participation is up 200% over the past two years.

“That has continued with an increase in the amount of weekly enquiries,” he said.

“We have also sustained regular weekly numbers right up until we shut down for Christmas.

“The success of BMX at the Tokyo Olympics created a real buzz… there’s a feel-good factor within British BMX currently and after the Olympics it is about as good as it gets.”

After a long autumn break from training, Whyte is now back on his BMX with one eye on the Paris Games in 2024.

He said: “I still feel like we still need to prove ourselves… velodrome (track cycling) they have had countless medals and we are just getting started now.

“BMX has only been in the Olympics since 2008 and freestyle just started this year… we still need to catch up with those guys.”

Whyte is trying out ice skating this winter as part of ITV’s Dancing on Ice, but for him the real prize is an upgrade on the Olympic medal, from silver to gold, in Paris.