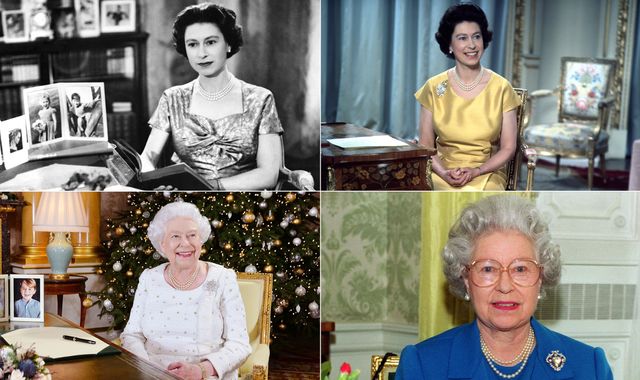 Today the Queen is delivering her 69th Christmas message.

She has made a speech on Christmas Day every year of her reign apart from one, when she wrote a letter to reflect on the previous 12 months instead.

The tradition, which began as the King’s Christmas Message in 1932, has since been broadcast in 3D and as a podcast.

Here Sky News looks back at the 10 most notable Christmas messages of the Queen’s reign.

The Queen gave her first Christmas message 10 months after she became sovereign, but before she was officially crowned.

It was broadcast live on the radio from her study at Sandringham.

She paid tribute to her “beloved” late father and reflected on her accession to the throne.

Her Majesty described belonging to the “far larger family” of the Commonwealth and the British Empire and thanked her new subjects for their “loyalty and affection” during the first few months of her new role.

Asking them to pray for her ahead of her June coronation, she wrote: “You will be keeping it as a holiday, but I want to ask you all, whatever your religion may be, to pray for me that day.”

Five years after her first Christmas message, it was televised for the first time.

Her 1957 speech was also the 25th anniversary of the first one of its kind, delivered by her father live on the radio in 1932.

She said she hoped that by people being able to see as well as hear her, it would make her message “more personal and direct”.

“It is inevitable that I should seem a rather remote figure for many of you,” she said.

“But now at least for a few minutes I welcome you to the peace of my own home.”

The Queen reflected on the changes in technology and warned that “ageless ideals” should not be thrown aside amid the innovations.

She congratulated Ghana and Malaysia on becoming independent and read an extract from the poem Pilgrim’s Progress.

As technology continued to evolve, 1967 was the first Christmas message to be broadcast in colour.

From 1960 onwards it was no longer delivered live and was instead pre-recorded in the days before Christmas.

The Queen reflected on Canada’s 100-year anniversary of its Confederation that year and her and Prince Philip’s five-week tour of the country to mark the occasion.

In 1967 she also knighted Sir Francis Chichester after he became the first man to sail solo around the world in his boat the Gipsy Moth IV.

In a nod to the changing times, she said: “No matter what scientific progress we make, the message will count for nothing unless we can achieve real peace and encourage genuine goodwill between people and the nations of the world.”

That year, the message came from Buckingham Palace for the first time.

The only year of the Queen’s reign that she did not record a Christmas message was 1969.

That year a special documentary called Royal Family had been released to mark the investiture of Charles as the Prince of Wales and the Queen decided that the Firm had received enough media coverage already.

She wrote a letter instead, which remarked upon the end of the decade that saw the first man set foot on the moon as well as tragedies around the world, such as the Aberfan disaster.

In a speech at the Guildhall earlier in the year, the Queen had described 1992 as an “annus horribilis”.

It saw a fire destroy part of Windsor Castle and the divorces of three of her children, as well as the ongoing scandals surrounding Princess Diana and Prince Charles.

In her Christmas message she described it as a “sombre year”, but said she hoped to “put it behind us” come 1993.

The speech itself was leaked and published by The Sun in the days before Christmas, which led to them having to pay £200,000 in damages for breach of copyright.

Newspaper bosses settled out of court and the money went to charity.

Five years after Windsor Castle was damaged by a fire, restoration work was finally complete, allowing the Queen to record her Christmas message in the White Drawing Room there that year.

Her festive speech was dominated by the death of Princess Diana in August, which she described as “unbearably sad”.

But there had also been the “happier event” of hers and the Duke of Edinburgh’s golden wedding.

“This interweaving of joy and woe has been very much brought home to me and my family during the last months,” she said.

Following Diana’s death, she said her thoughts were with those who were “alone, bereaved or suffering”.

She also noted the 50-year anniversary of India and Pakistan’s independence.

It was the first year the Christmas message was available on the internet.

As the new millennium drew near, the Queen reflected on the “pace of change”.

She said on her mother’s 99th birthday in August she had noted how “different were her early years compared with those of my grandchildren”.

At 73 she said people of her age feared being “left behind” and the “familiar and the comforting” being “swept away”.

But she urged them not to be anxious and to “make sense of the future”.

“Winston Churchill, my first prime minister, said that ‘the further backward you look, the further forward you see’,” she said.

That year she opened the new Scottish parliament and urged people not just to get excited by “new gadgets” but also to keep living by the Christian teaching of loving thy neighbour.

In 2006 the Queen’s Christmas message became available to download as a podcast for the first time.

It was also recorded outside of the royal residences at Southwark Cathedral in London where Her Majesty had met with schoolchildren working on the Nativity.

She said she was impressed by their “energy, vitality and ambition to learn and to travel”.

Reflecting on how the old and the young could learn from one another, she said: “I am reminded of a lady of about my age who was asked by an earnest, little granddaughter the other day, ‘Granny, can you remember the Stone Age?’

“Whilst that may be going a bit far the older generation are able to give a sense of context as well as the wisdom of experience which can be invaluable.”

Sky News was in charge of the Christmas Day speech that year and allowed people with 3D-ready TVs to see the Queen in three dimensions.

Her Majesty described the Olympics and Paralympics as a “splendid summer of sport”, which she opened alongside Daniel Craig playing James Bond.

The stunt saw Craig collect the Queen from Buckingham Palace and fly her in a helicopter to the Olympic Stadium in Stratford, east London ready to attend the opening ceremony.

In her Christmas message she thanked the “army of volunteers” who helped make the Games possible.

“Those public-spirited people came forward in the great tradition of all those who devote themselves to keeping others safe, supported and comforted,” she said.

The Christmas message of 2017 focused on the theme of “home” in light of the Manchester Arena terror attack and the Grenfell Tower Fire.

She said the two cities’ “powerful identities shone through… in the face of appalling attacks”.

The Queen visited some of the surviving victims in the days after the bombing, which she described as a “privilege”.

“The patients I met were an example to us all, showing extraordinary bravery and resilience,” she said.

She also recalled the “sheer awfulness” of the Grenfell tragedy, which killed 72 people, and noted that many of the firefighters who helped on the day “will not be home today because they are working to protect us”.

“Six decades on, the presenter of that broadcaster has ‘evolved’ somewhat,” she said.