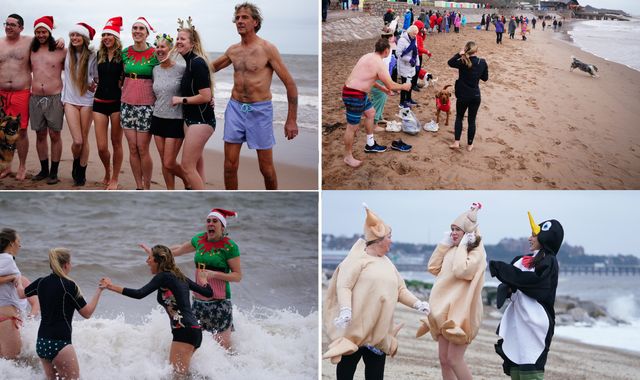 While many people will have spent Christmas morning enjoying a bucks fizz in their pyjamas, some braved the cold weather and headed to the coast for a festive swim.

From Brighton Beach on the south coast to Portobello Beach in Edinburgh, people donned their swimming costumes or fancy dress and started Christmas Day with a bracing dip in the sea.

In Edinburgh, some people wore elf outfits and tutus before jumping in the ocean, while there were similar scenes at Tynemouth Beach in the North East.

A group of women braved the cold water together, holding hands as they entered the sea.

However, due to bad conditions the dip in Felixstowe, Suffolk, was called off at the last minute.

The event is organised by St Elizabeth’s Hospice, which tweeted that the swim had been cancelled due to windy weather.

“We are so disappointed that we have to make a change like this so close to the event date,” it said.

“It is not a decision we have taken lightly and your safety will always be our number one priority”.

Before the cancellation, two swimmers were spotted wearing clown costumes and did make it into the sea, but those left disappointed included people dressed as turkeys, penguins and elves.

There were around 450 swimmers taking part in the festive swim in Weymouth, all dressed in seasonal attire.

At Boscombe Pier, Bournemouth, almost 750 people turned up to take the plunge, hoping to raise £50,000 for the Macmillan Caring Locally charity.

Sea temperatures were around 9-10C, but in some parts, it was as low as 7C.

The UK isn’t the only country with this Christmas Day tradition, with people enjoying the sea swims in Germany and Australia.

However, in Australia December falls in the summer, so people will be enjoying warm weather, barbeques and surfing during the festive period.

Share
Facebook
Twitter
Pinterest
WhatsApp
Previous articleUK weather: Dreams of a white Christmas come true in parts of the North – with heavy rain forecast later for some
Next articleCOVID-19: New coronavirus restrictions ‘could be in place until late March’ under measures examined by scientific advisers