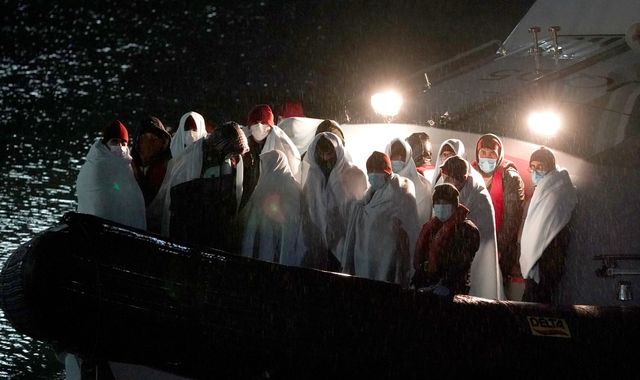 At least 67 people were rescued after attempting to cross the English Channel in the early hours of Christmas Day.

Border Force agents were pictured bringing a group of people into Dover, Kent, at around 1.30am this morning, following an incident involving two small boats.

Images showed people huddled together on the boat while wearing blue face masks.

French authorities also intercepted one boat on the same day. It is not known how many people were on the third boat.

Tom Pursglove, minister for justice and tackling illegal migration, warned people should not be trying to cross the Channel but be instead claiming asylum in the first safe country they reach.

He said the government was reforming its approach to people crossing the Channel through its Nationality and Borders Bill.

Mr Pursglove said: “The public have been crying out for reform for two decades and that’s what this government is delivering through our new plan for immigration.

“The Nationality and Borders Bill will make it a criminal offence to knowingly arrive in the UK illegally, and introduce life sentences for those who facilitate illegal entry into the country.

“It will also strengthen the powers of Border Force to stop and redirect vessels, while introducing new powers to remove asylum seekers to have their claims processed outside the UK.”

Last month, at least 27 people drowned in the Channel near Calais when their boat sank during a crossing.

Prime Minister Boris Johnson said at the time that the deaths were a “disaster”, before adding that it was vital to “break” the people trafficking gangs.

He said: “It also shows how vital it is that we now step up our efforts to break the business model of the gangsters who are sending people to sea in this way.