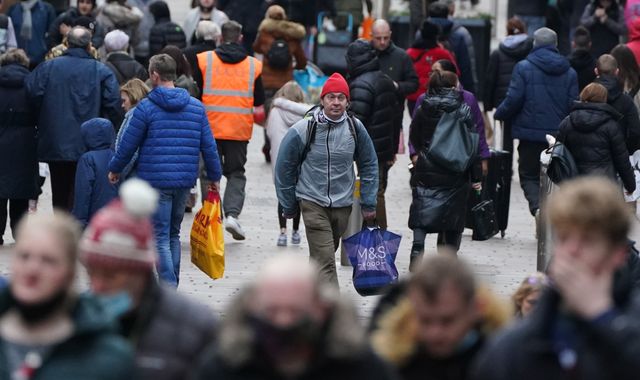 The UK has recorded 122,186 new cases of coronavirus and a further 137 deaths, the latest daily figures show.

It is the highest number of new infections reported since the beginning of the pandemic. Yesterday there were 119,789 cases and 147 fatalities within 28 days of a positive test recorded.

The UK Health and Security Agency (UKHSA) has reported another 23,719 Omicron infections, meaning the total is now 114,625.

Head of the UKHSA, Dr Jenny Harries, said coronavirus data needs to be treated with caution over the festive period because it “might not give a particularly true picture”.

There will be no official updates on Christmas Day and Boxing Day.

The scientific advisory group SAGE said there is an “apparent slowing of growth rates” in its latest set of minutes.

This may be a “genuine slowing related to changes in mixing patterns or behaviours”, it added.

It may also be because of a “reduction in the remaining number of susceptible people in some sub-groups”.

But it cautioned: “Changes in testing behaviours in the lead up to the Christmas weekend are also a possible factor, in which case it may not be a genuine slowing.”

Meanwhile, the Office for National Statistics says an estimated 1.7m people had coronavirus across the UK last week.

Its data covers people who tested positive for COVID-19 outside hospital or a care setting during week ending 19 December.

In England there were 1.5 million people with the virus that week – the equivalent of one in 35 people.

The figure was highest in London, where most cases of the Omicron variant have been detected, at a rate of one in 20 people.