COVID-19: New coronavirus restrictions ‘could be in place until late March’ under measures examined by scientific advisers 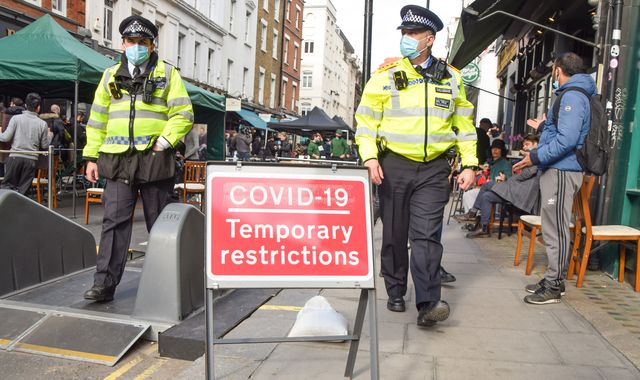 Scientific advisers to the government have predicted that any new coronavirus restrictions – including a ban on indoor mixing – could be in place until the end of March in order to reduce COVID-19 deaths in England.

Their modelling considered the impact of a return to ‘Step 2’ restrictions, which were in place in April in England, from Tuesday 28 December or New Year’s Day until 15 January, 28 January or 28 March.

In a paper, experts from the Scientific Pandemic Influenza Group on Modelling estimated that putting the measures in place from 28 December until the end of March would reduce the number of COVID-19 deaths by 39%, while the figure was only 18% if they were in force until mid-January.

The rules would include a ban on socialising with another household indoors, a return to the rule of six outdoors, and pubs and restaurants only being open for outdoor service.

The advisers from Warwick University said the restrictions would reduce the peak of hospital pressure by about half of what it would be if the UK sticks to current Plan B measures only.

The modelling, published on Christmas Eve, has not yet been seen by ministers, who could make a decision as early as next week on whether additional restrictions are needed.

Predictions were also made about what would happen if people voluntarily changed their behaviour to reduce mixing by about half the amount that Step 2 would achieve.

The paper concluded it would result in “only a very small reduction in severe outcomes compared to Plan B alone”.

“Step 2 has a much larger effect,” they said.

The work was completed before the latest official data suggested the Omicron variant causes milder illness than Delta.

Dr Jenny Harries, chief executive of The UK Health Security Agency, said the figures offer a “glimmer of Christmas hope” but added it is too early to downgrade the variant’s threat level.

The Scientific Advisory Group for Emergencies (SAGE) has warned that “the peak in (hospital) admissions is highly uncertain but, even with a reduction in severity, may be comparable to or higher than previous peaks in the absence of significant behaviour change or further interventions”.

Minutes of the group’s meeting on 23 December also noted that “the earlier interventions happen, and the more stringent they are, the more likely they are to be effective”.

It was the highest number of new infections reported since the beginning of the pandemic.

Another record was set after an estimated 1.7 million people had coronavirus across the UK last week, according to the Office for National Statistics.

One in 35 people had the virus in England, with the highest rate (one in 20) in London, where most cases of the Omicron variant have been detected.

Since 18 December, more than half a million people have tested positive for the virus in the UK and are likely to be self-isolating during Christmas.

But SAGE said there is an “apparent slowing of growth rates”, which may be because of a “reduction in the remaining number of susceptible people in some sub-groups” – or a drop in the number of people getting tested over the festive period.

To tackle to spread of the variant, the government is urging people to get a booster jab today and tomorrow as part of NHS England’s “jingle jab” campaign.