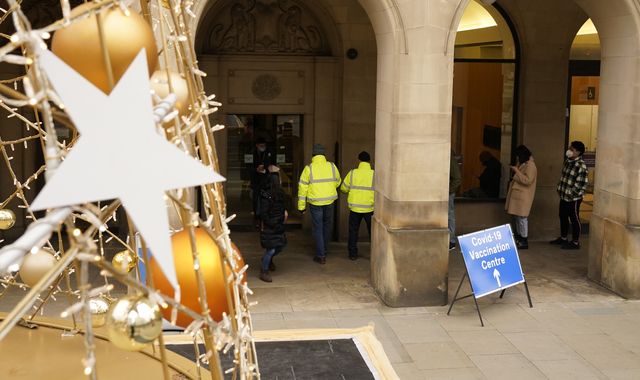 The UK has recorded 119,789 new COVID cases in the latest 24-hour period – the highest daily figure since the start of the pandemic.

A further 147 coronavirus-related deaths have also been reported.

The latest daily figures compare with 106,122 cases – the previous record – and 140 deaths reported on Wednesday.

Yesterday’s 106,122 figure has since been revised up to 109,655 following previous under-reporting in Scotland due to a technical issue.

See live updates on COVID in UK and around the world

Another 16,817 cases of the Omicron variant have been detected in the UK in the latest 24-hour period, surpassing the previous high on Tuesday of 15,363.

A total of 90,906 Omicron cases have now been identified.

It comes as the Scientific Advisory Group for Emergencies (SAGE), which has been advising the government during the pandemic, has warned that COVID data over the Christmas period will be “significantly disrupted”.

In minutes from a meeting on 20 December, the group warned that “testing behaviour and capacity limits may already be affecting case data”, which would make “interpretation of trends difficult”.

People with Omicron are significantly less likely to develop severe symptoms, but the effects of the booster vaccine wane after 10 weeks, according to new analysis by the UK Health Security Agency (UKHSA).

Early results suggest people are 30 to 45% less likely to go to A&E if they are infected with Omicron rather than Delta. They are also 50 to 70% less likely to be admitted to hospital.

The data shows that 10 weeks after the booster the effect in preventing symptomatic disease dropped by 15 to 25%.

The majority of people in the high risk groups received their booster eight to 10 weeks ago. And the agency says it believes that protection against serious disease would hold up for longer.

Meanwhile, a total of 840,038 booster and third doses of COVID vaccine were reported in the UK on Wednesday.

This is the lowest daily figure since 15 December.

More than 31.6 million booster and third doses have now been delivered in the UK, with 6.2 million in the past seven days.

Earlier on Thursday, new data from the Office for National Statistics revealed that COVID infection levels have reached a record high in the UK.

An estimated 1.4 million people in the UK had the virus in the week ending 16 December, the highest number since comparable figures began in autumn 2020, the ONS said.

London has the highest rate, with 1,732.6 cases per 100,000 people in the seven days to 19 December, up significantly from 729.7 the previous week and the highest figure for London since comparable figures began.

Despite the high levels of infection in the UK, Health Secretary Sajid Javid maintained that no further restrictions in England would be set out before Christmas.

Mr Javid said that people “should enjoy their Christmases with their families and their friends” but added they should “of course, remain cautious”.

The health secretary welcomed studies suggesting the Omicron variant may cause less severe illness than earlier strains, but he warned it could still lead to “significant” hospital admissions.

NHS national medical director Professor Stephen Powis warned that the health service is on a “war footing” as Omicron sweeps through the country.

Share
Facebook
Twitter
Pinterest
WhatsApp
Previous articlePrince Philip: Service of thanksgiving for the life of the Duke of Edinburgh to take place in spring next year
Next articleBoris Johnson and Sir Keir Starmer issue solemn Christmas messages in nod to COVID sorrow