COVID-19: Omicron up to 70% less likely to lead to hospital admission than Delta but effectiveness of booster jabs waning for some, says UKHSA 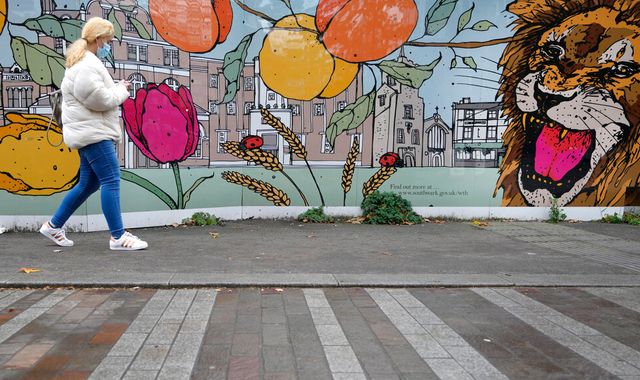 People with Omicron are significantly less likely to develop severe symptoms, but the effects of the booster vaccine wane after 10 weeks, according to new analysis by the UK Health Security Agency (UKHSA).

Early results suggest people are 30 to 45% less likely to go to A&E if they are infected with Omicron rather than the Delta variant.

They are also 50 to 70% less likely to be admitted to hospital.

The findings are broadly similar to estimates calculated by researchers in Scotland and Imperial College London on Wednesday.

However, the results are largely based on people under the age of 40, who currently have the highest case rates of Omicron.

Live updates on COVID in the UK and around the world

The variant is still less common in those aged over 60, who are more likely to develop severe disease, and the UKHSA says further analysis will be needed in the coming weeks.

Analysis by the agency, formerly called Public Health England, also shows that the effect of the booster dose in protecting against the variant is already beginning to wane in some people.

It shows that 10 weeks after the booster the effect in preventing symptomatic disease dropped by 15 to 25%.

The majority of people in the high-risk groups received their booster eight to 10 weeks ago. And the agency says it believes that protection against serious disease would hold up for longer.

Independent scientists have warned that even a “milder” virus that causes large numbers of cases could still lead to a surge in hospital admissions.

The UKHSA’s latest variant technical briefing also shows that 132 people had been admitted to, or transferred from emergency departments, with Omicron as of 20 December.

More than 40% of the hospital admissions were in London.

Of those patients admitted to hospital, 17 had received a booster vaccine, 74 people had two doses and 27 people were not vaccinated.

The vaccination status was unknown for six people, while eight had received a single dose.

The population rate of people becoming infected with Omicron after having previously contracted COVID has increased sharply.

The agency’s data shows 9.5% of people with Omicron have had COVID before, which is likely to be a substantial underestimate of the proportion of reinfections, as many prior infections will have been asymptomatic and not picked up by the analysis.

Dr Jenny Harries, UKHSA chief executive said: “Our latest analysis shows an encouraging early signal that people who contract the Omicron variant may be at a relatively lower risk of hospitalisation than those who contract other variants. However, it should be noted both that this is early data and more research is required to confirm these findings.”

Health Secretary Sajid Javid said: “This new UKHSA data on Omicron is promising – while two doses of the vaccine aren’t enough, we know boosters offer significant protection against the variant and early evidence suggests this strain may be less severe than Delta.

“However, cases of the variant continue to rise at an extraordinary rate – already surpassing the record daily number in the pandemic. Hospital admissions are increasing, and we cannot risk the NHS being overwhelmed.”

The data comes as a further 16,817 daily Omicron cases were confirmed in the UK – the highest daily figure for the variant in the country so far.

It means the UK has so far confirmed a total of 90,906 Omicron cases.

According to the UKHSA agency, 14 people have died within 28 days of an Omicron diagnosis ranging from 52 to 96 years old.

The UK has recorded 119,789 new COVID cases in the latest 24-hour period – the highest daily figure since the start of the pandemic.

A further 147 coronavirus-related deaths have also been reported.

Share
Facebook
Twitter
Pinterest
WhatsApp
Previous articlePrince Philip: Service of thanksgiving for the life of the Duke of Edinburgh to take place in spring next year
Next articleBoris Johnson and Sir Keir Starmer issue solemn Christmas messages in nod to COVID sorrow