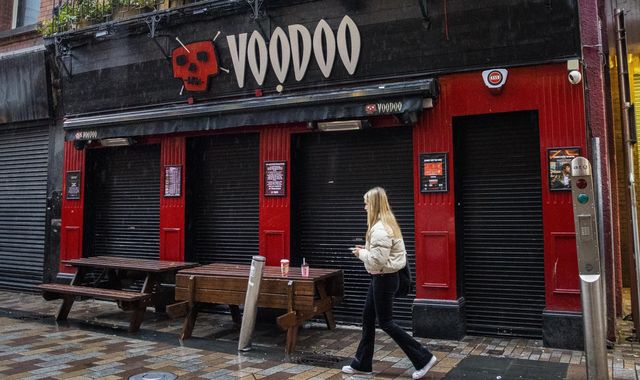 Nightclubs in Northern Ireland will close from Boxing Day as part of new COVID-19 measures agreed by Stormont ministers.

It comes on the same day the nation recorded 3,231 daily cases – the highest number since the start of the pandemic.

The Omicron variant is set to become the dominant strain of coronavirus in Northern Ireland “within a matter of days”, Deputy First Minister Michelle O’Neill told a news conference.

Ms O’Neill warned the “scale of transmission” will be “hugely challenging” and is set to create “significant pressures” on healthcare.

In response, Stormont is introducing a number of measures – including no indoor dancing and standing events from 6am on Boxing Day.

People will be asked to limit mixing to a maximum of three households from 27 December.

The rule of six has returned for indoor hospitality.

And more people will be asked to work from home if possible, with businesses urged to take reasonable measures to achieve two-metre social distancing.

Regular workplace testing will be encouraged and the rules on face coverings will be strengthened, the deputy first minister said.

Ms O’Neill said politicians were dealing with an “evolving situation” with measures kept “under continuous review”.

Data is being analysed “day and night” and will be throughout the Christmas period.

“As the situation stands today, and it is an ever-changing situation, Omicron already accounts for 40% of our COVID-19 cases and it will become the dominant strain within a matter of days,” Ms O’Neill told the briefing.

“Today we have recorded the highest number of new cases and the infection rate is going to rise sharply over the next number of weeks.”

First Minister Paul Givan earlier said 53% of eligible adults, equating to almost 750,000, have now got the booster jab – as he urged people to come forward.

The measures will be reviewed on 30 December, he said, adding: “The message is the same, whether it is in regulation or guidance.”

Health minister Robin Swann said Omicron was “deeply concerning” and posed a “dual threat” in terms of the virus posing a risk to very large numbers of people and the potential for “very serious and unprecedented work force disruption” across all essential services.

The severity of the variant is under the closest of scrutiny, he told the news conference – as he warned the public must take the threat seriously and urged against “complacency”.

The politicians said they stopped short of further measures because sufficient funding has not been allocated from London – as Ms O’Neill vowed to press the Treasury for financial support.

Stormont leaders are also developing a financial package to support businesses, the deputy first minister added, as she commended the public for dealing with “difficult and challenging circumstances”.

Westminster also came under fire from Welsh First Minister Mark Drakeford who said Boris Johnson’s government was “in a state of paralysis” as he unveiled new rules for Wales.

The UK Health and Security Agency (UKHSA) is expected to announce its findings on the Omicron variant on Thursday.

Reports suggest it could be milder than the Delta variant for most people – but scientists fear its increased transmissibility could “potentially overwhelm” health services.

Share
Facebook
Twitter
Pinterest
WhatsApp
Previous articleCOVID: People with Omicron less likely to be hospitalised than those with Delta, study suggests
Next articleCOVID-19: More than 100,000 daily coronavirus cases reported in UK for first time in pandemic