COVID-19: More than a million had virus in UK in one week in new record – ONS estimate 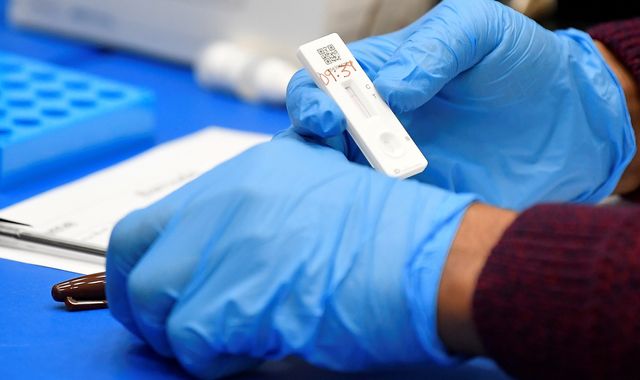 A record number of people had COVID in the most recent week for which figures are available, according to the latest estimates.

The Office for National Statistics said around 1.4 million people in the UK were probably infected with COVID-19 in the week ending 16 December, which is the highest figure since comparable records began in autumn 2020.

Around one in 45 people in private households in England are thought to have had COVID in the week to 16 December, which was up from one in 60 the previous week.

In Wales, around one person in 55 was estimated to have had COVID in the week to 16 December, although this was unchanged from the previous week and below the recent record high of one in 40.

In Northern Ireland, the latest estimate is one in 50 people, also unchanged from the previous week and slightly below the record high of one in 40 in mid-August.

And in Scotland, the latest estimate is one in 70, up from one in 80 the previous week and below September’s peak of one in 45.

It comes as Health Secretary Sajid Javid said no post-Christmas measures for England would be announced this week, despite the rising cases.

He said: “We’re clear that there’s no need for any further restrictions of any type before Christmas but of course we will keep the situation under review.”

Meanwhile, the percentage of people who would have tested positive for the virus in the latest week is estimated to have increased in all regions of England except the North East, South West and West Midlands, where the trend is uncertain, the ONS added.

The ONS makes its estimates by testing people living in private households with the help of the University of Oxford, University of Manchester, UK Health Security Agency and Wellcome Trust.

The data is uncertain as it is an estimate based on modelling.

The relatively small number of tests in Wales, Northern Ireland and Scotland mean results should be interpreted with caution.

Share
Facebook
Twitter
Pinterest
WhatsApp
Previous articleLittle donkey ‘back on all fours’ as he gets prosthetic leg from Dorset Orthopaedic team
Next articleCOVID-19: Omicron less likely to cause severe symptoms but effectiveness of booster jabs waning for some, says UKHSA