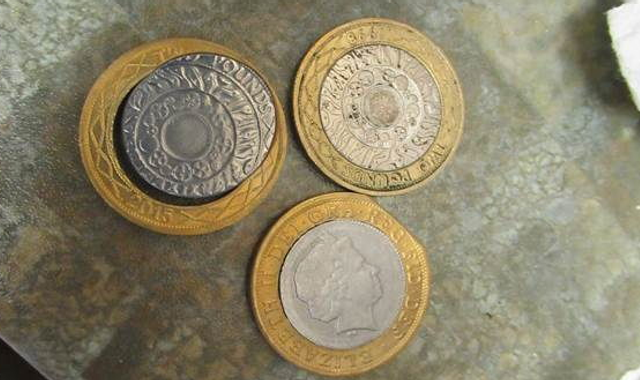 Deep beneath the streets of London, locked in a vault behind a heavy swing door and iron gate, is the world’s largest collection of rare coins.

There are around 20,000 of them, from Roman denarii and ancient Greek decadrachms to British gold double sovereigns.

They differ in age, size, shape and the metal from which they were made, but they have one thing in common – they are all fakes.

They’ve been collected over 150 years by UK coin dealer Baldwin’s, whose experts can spot a forgery that would fool most amateur coin collectors.

Consultant numismatist Richard Gladdle took me into the Baldwin’s vault for a rare glimpse of the fakes collection. There are many trays of them.

He said: “Baldwins has been dealing in coins since 1872 and every time they buy a collection there’s likely to be a couple of forgeries in it. Some people who bring coins in for auction are very disappointed when we tell them they have a fake.”

The first coins were made around 600 BC in Southern Turkey by King Croesus – hence the saying “as rich as Croesus” – and forgers started faking them almost at once. In Celtic Britain gold coins were counterfeited using gold and silver plate.

Richard said: “Today there are lots of coins worth over a million pounds, so if you can make one to look like one of those and sell it for a fraction of the market value you are still making a lot of money. People have to be very wary.”

But just because a coin is a fake, it doesn’t necessarily mean it is worthless.

Richard put down in front of me two almost identical George V gold £2 coins dated 1911. I couldn’t tell the difference, except the real one was shinier.

“That’s because the real one is pure 22 carat gold and in proof condition and the fake is less pure, but what condemns it is the weight,” said the numismatist.

He then explained that the genuine coin weighed 15.98 grams, compared with the fake’s 15.93 grams. Not that much difference, but a crucial giveaway, apparently.

Last year a criminal gang were caught making modern £2 coins which they sold at car boot sales across Essex. They had bought enough metal to make 107,640 coins with a face value of £215,280.

Richard tipped onto the table a box of Roman coins that could have been dug up by a metal detectorist, of which the UK has many thousands. But these counterfeits were sold to gullible British tourists who’ve been visiting Rome for hundreds of years.

“English m’lords would wander around Roman ruins and the Italians soon cottoned on to the idea they might like to buy some coins,” he said. “They are obviously not Roman coins. You can tell that very easily, well we can, but they are highly collectible now as 18th copies. Some worth £200.”

In other trays were ancient Greek decadrachms, official copies of genuine coins kept in the British museum and minted for educational purposes.

Richard said: “The trouble was the coins tended to leave universities and schools and get passed on as the real thing.”

He held one in the palm of his hand. “The original, if that were real, is worth £40,000, so you can see if you tried to pass that on in the pub for £3,000, here’s a Syracuse decadrachm, someone might think they were getting a real bargain.”

The world’s most expensive coin is a US double eagle gold $20 piece that sold for $19m at a Sotheby’s auction earlier this year. It is one of only 10 that were made and the only one privately owned.

“The 20 most valuable coins in existence are American,” said Richard. “So if you were a villain who wanted to counterfeit coins those are the ones to fake.”

The UK’s National Crime Agency said the Essex fake £2 coin investigation was a rare example of modern coin forgery, though there have been other cases.

In 2012 a man was jailed for five years for making 14 million fake £1 coins in his north London workshop where he said materials were delivered by two mystery men he knew only as Tom and John.

He said he had been making the coins for seven years after losing his job as an engineer. At one point he was producing 12,000 coins a day, for which he was paid £2,000 cash a week.

They were made at the European Central Mint in Amsterdam which was later shut down. Two British and two Dutch men were jailed.

And Scotland Yard’s Arts and Antiques unit has recently investigated the smuggling of fake ancient coins into the UK.

A Metropolitan Police spokesman said: ‘Seizures have been made recently which include both fake and illicitly excavated coins, which indicates that the same organised criminal networks profit from both these types of criminality.

“Some of the fakes we have recovered are very convincing, and can only be detected by specialist numismatists.

“We would recommend that anyone considering buying an ancient coin speaks to the seller to understand as much as possible about the origins and ownership history of the piece.”

Perhaps the most extraordinary case is one in southern India where this year police arrested antiques dealer Monson Mavunkal on forgery allegations.

Among the treasures at his Kochi home were what he claimed were two of the 30 pieces of silver paid to Judas Iscariot for betraying Jesus Christ.

Richard Gladdle was more than a little sceptical. “It’s preposterous. You couldn’t possibly say they were handed down from generation to generation, saying these were given to me by my great uncle Judas through 60 generations.”

One day those Judas coins may end up in that collection beneath the streets of London.