COVID: People with Omicron less likely to be hospitalised than those with Delta, study suggests 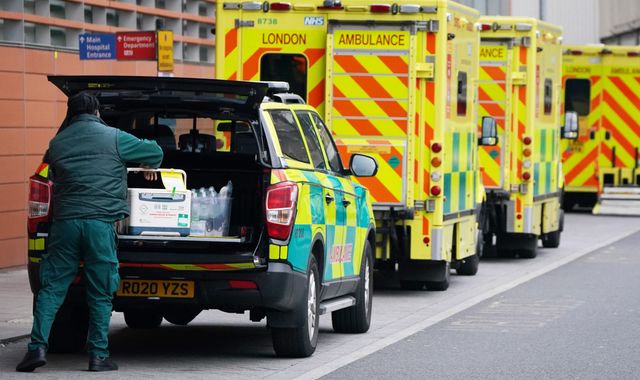 People who test positive for Omicron are 15-20% less likely to be admitted to hospital compared to those infected with Delta, according to a new study in England.

The risk of hospitalisation is similar for Omicron and Delta in people who test positive and previously had at least two vaccine doses, the research concluded.

Live COVID updates from UK and around the world

However, the risk of hospitalisation is higher for those who are un-jabbed according to the study.

It comes as reports indicate Omicron is milder than Delta for most people – but this has not been confirmed by the UK Health Security Agency (UKSHA) which is due to announce its findings on the variant on Thursday.

The sample for the Imperial College study, which has not been peer-reviewed, included 56,000 Omicron cases and 269,000 Delta cases.

Professor Neil Ferguson from Imperial said: “Our analysis shows evidence of a moderate reduction in the risk of hospitalisation associated with the Omicron variant compared with the Delta variant.

“However, this appears to be offset by the reduced efficacy of vaccines against infection with the Omicron variant.”

He warned the “high transmissibility” of Omicron could lead to health services facing “increasing demand” if cases grow at the rate seen recently.

The daily figure is a slight fall on Tuesday’s number which was 15,363.

Meanwhile a separate study from Scotland suggests the risk of hospitalisation with Omicron is two-thirds lower than with Delta.

The research by University of Edinburgh scientists and other experts in Scotland was based on only 15 people in hospital and has also not been peer-reviewed.

The report says: “These early national data suggest that Omicron is associated with a two-thirds reduction in the risk of COVID-19 hospitalisation when compared to Delta.”

Further data from South Africa suggests people catching COVID are 80% less likely to be taken to hospital with Omicron, compared with other strains.

Patients are 70% less likely to develop severe disease compared with Delta, according to the National Institute for Communicable Diseases.

But researchers stressed the severity of the the variant could be different for other populations.

Experts welcomed news of the Scotland study – but urged caution given how small the sample is.

Professor of structural biology at Oxford University, James Naismith, warned although a two-thirds reduction is “significant”, Omicron can still cause severe illness in the doubly vaccinated.

“If Omicron continues to double every few days, it could generate many more hospitalisations than Delta from the double vaccinated population.

“In my view the best news in the study is the observation that the booster is highly effective at reducing serious illness from Omicron.

“Put crudely we have more time to get more people boosted, we can’t waste a moment of it.

“Everything we can do as individuals to slow spread gives us more time. In my view, there is now solid reason to favour a more optimistic outcome of Omicron in the UK than was feared,” he added.