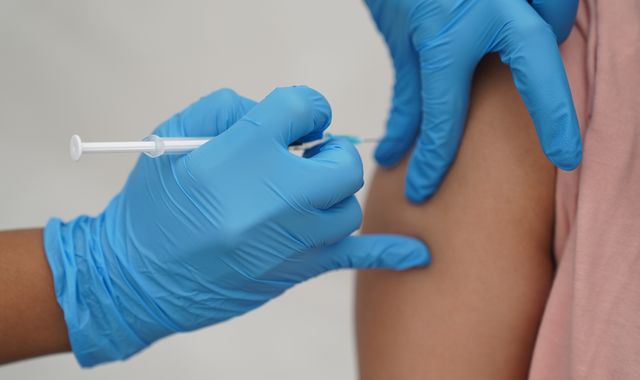 The UK has bought an extra 4.25m courses of antivirals for the NHS to help fight the Omicron variant of COVID.

The government said an additional 1.75m courses of Merck Sharp and Dohme’s (MSD) molnupiravir would be available for treating members of the public from early next year, along with 2.5m extra courses of PF-07321332/ritonavir, which is otherwise known as Pfizer.

Antivirals are treatments used to either treat people infected with a virus, but can also protect exposed individuals from becoming infected.

They are designed to target the virus at an early stage, preventing progression to more severe, or even critical, symptoms.

Health Secretary Sajid Javid described the purchase as “a mammoth deal” and said patients across the country would benefit from the antivirals over the coming months.

It comes after Boris Johnson announced yesterday that people would be able to continue with their Christmas plans over the coming days.

However, he warned there may be tougher restrictions brought in after 25 December.

Dr Margaret Harris, of the World Health Organisation, told Times Radio that people should encourage their loved ones to get vaccinated as cases of Omicron continue to rise.

When asked about the fact that a third of London’s population was unvaccinated, she said there was a “small group of hardliners”.

However, she said most those who were still unvaccinated had gone to get their jab when “it wasn’t the right day or their GP didn’t have the vaccine or they’re housebound”, or had not known where to go for one.

She said: “It’s up to all of us to help those who are yet to be vaccinated to find a way to get vaccinated, and if that involves having a long conversation with a relative who’s got concerns, please do it.”

Dr Harris also explained why the WHO was advising people to “scale back” festive plans.

“Certainly have Christmas and certainly enjoy that time, but keep it small – don’t go to big, large gatherings where there are lots of people coming from all over the place, and that’s where mostly a lot of the transmission occurs,” she said.

“So, have a small gathering, know who’s coming, ideally have everyone vaccinated, and take all the precautions – do your best to have a well-ventilated space and open the windows whenever you can – we are basically saying keep it small, keep it careful, keep it happy.”

The UK Health Security Agency (UKHSA) confirmed yesterday that a further 15,363 cases of the Omicron variant had been recorded, which took the nationwide total so far up to 60,508.

The latest figures also revealed that 897,979 booster vaccinations were given out in the latest 24-hour period, meaning a total of 29.8 million people across the country have now had a third jab.