COVID-19: Rule of six to be introduced in hospitality settings in Wales to curb spread of Omicron 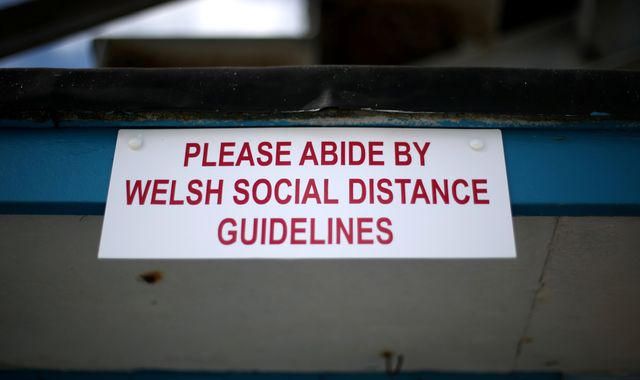 Wales has announced new measures to limit the spread of Omicron, including the introduction of the “rule of six” in hospitality venues.

The new rules will apply from Boxing Day, he added, saying the devolved administration was bringing them in because “the UK government is in a state of paralysis”.

• The rule of six in all gatherings in regulated premises, such as hospitality, cinemas and theatres, meaning only six people from separate households are allowed to meet

• A requirement of two-metre social distancing in all premises open to the public and workplaces, where reasonable

• Face coverings to be required in hospitality settings at all times, apart from when seated

• All licensed premises will need to take additional measures to protect customers and staff, including table service and collecting contact details

• Large events will not be allowed indoors or outdoors. The maximum number of people who can gather at an indoor event will be 30 and 50 outdoors

Last week, new measures were announced for workplaces and retail, which will now come into force on Boxing Day along with the closure of nightclubs.

Mr Drakeford said the Welsh government needed the help of the UK government to put furlough arrangements in place for businesses that will be hit by the extra protections brought in after Christmas.

UK government in ‘state of paralysis’

Mr Drakeford said: “When we see the evidence, and we’re told about the actions we can take to protect people, we will take them.

“I think there’s a real contrast with the paralysis of a UK government simply unable to act,” added the Labour Party politician.

“They are paralysed by their internal divisions and are unable to act on it.”

He said both the Welsh and UK ministers had seen the same data “but they’re not prepared to act on it”.

“I think the UK government is in a state of paralysis about all of this,” he said, adding: “We see the reports of infighting within the Cabinet.”

‘Disruption to daily lives and businesses’

The Welsh government announced £120m – up from £60m previously – to help businesses affected by the move to alert level two.

The new measures will be reviewed on a weekly basis, Mr Drakeford said, but the doubling of funds mean the Welsh government is able to extend its help for businesses into February “should that help be needed”.

The new guideline measures come alongside a separate offence prohibiting large gatherings of 30 people or more indoors, or 50 people outdoors, in private homes and gardens.

Mr Drakeford said: “We are facing a very serious situation in Wales. A wave of infections caused by the new, fast-moving and very infectious Omicron variant is headed our way.

“This new form of coronavirus could infect large numbers of people in Wales, disrupting daily lives and businesses and could cause an increase in the number of people who need hospital care in the coming weeks.

“We will do everything we can to protect people’s health and livelihoods in Wales – this means taking early action to try and control its spread.

“Nobody wanted to see the return to alert levels and to the protections that I’ve announced today. But we are now entering a really serious phase of the pandemic.

“Wales will reopen after Christmas, but in order to do so safely we have to everything we can to go on protecting ourselves and taking care of others.”

Asked if the measures were excessive in the light of reports suggesting Omicron was less severe than the Delta variant, Mr Drakeford responded that assumption was based on a misunderstanding.

“If Omicron was only half as severe as Delta, because of the extra speed at which it is transmitted, that would buy you 48 hours before you see those numbers and numbers of people going into hospital climb to the very steep levels that we have seen.

“So the information on whether it is more serious is much more contested… The detail that I have seen suggests if you have already been infected by coronavirus, it may be that Omicron will not be as severe as the first time you are infected.

“If you’re getting it for the first time, there is no evidence that it is any less severe than any of the earlier variants.

“So I’m afraid – nice as it would be to think that that will solve the problem of January for us – just the sheer number of people who will fall ill, and the more nuanced information about severity, means that the protections that we have announced today are a necessary precaution against the impact that we think we will see in Wales.”