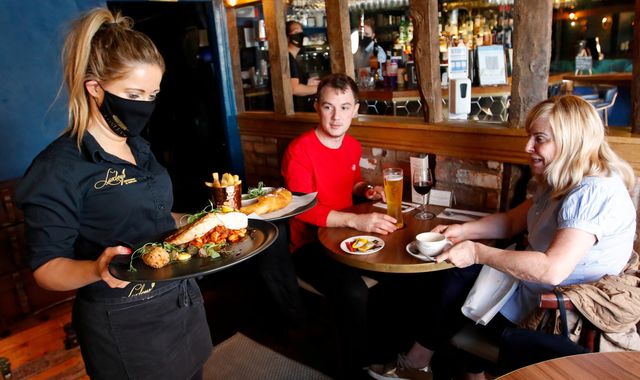 Rishi Sunak has announced an additional £1bn in financial support for the hospitality and leisure sectors, with every business able to claim a one-off cash grant of £6,000.

The Treasury is also providing a £30m top-up to the Cultural Recovery Fund – which supports institutions such as museums and theatres – and reintroducing the Statutory Sick Pay Rebate Scheme which allows small and medium-sized companies to claim compensation from the government for the cost of their employees’ sick pay.

The chancellor said he is taking the measures due to the current situation being “very difficult, especially for those in the hospitality industry” as coronavirus cases continue to rise steeply.

It comes amid reports that further restrictions could be introduced in England over the festive period.

Many pubs and restaurants have been hit hard by mass cancellations amid fears over the spread of the new Omicron variant.

Following guidance to work from home and to prioritise social engagements, offices in major cities have emptied out and Christmas parties have been cancelled, hurting hospitality businesses.

Mr Sunak cut short his trip to the US to hold more talks with a range of hospitality and business organisations including peri-peri chicken restaurant Nando’s and brewery giant Greene King in response to the fresh COVID crisis on Friday.

Hospitality UK has reported that many businesses have lost 40-60% of their December trade, often their most profitable month.

Announcing the new economic support package on Tuesday, the chancellor said his Treasury have responded “generously” to a “difficult” situation.

“I know the current situation is very difficult especially for those in the hospitality industry so today we are announcing three new measures to help people and businesses,” Mr Sunak said.

“Firstly we are announcing a billion pounds in financial grant support which means eligible hospitality companies will be able to claim a cash grant worth up to £6,000.”

Top-ups for theatres and museums

The chancellor has also announced a “£30m to top up our successful cultural recovery fund to support institutions like theatres and museums”.

“And lastly, we are reintroducing our statutory sick pay rebate scheme so that small and medium sized companies can claim compensation from the government for the cost of sick pay for their employees.

“Taken together, I am confident that these measures will help hundreds of thousands of businesses and the millions of people that they employ.”

The chancellor added that he will act accordingly when asked if additional financial help could follow if more restrictions are imposed.

“Now, of course I will always respond proportionately and appropriately to the situation that we face, people can have confidence in that, but where we are now we have responded I think generously today.

“The grants that I’ve outlined, up to £6,000, are comparable to the grants that we provided for hospitality businesses when they were completely closed earlier this year – so there is a benchmark for you.”

He added that support including the reduced rate of VAT for the hospitality and tourism sectors lasts all the way into next spring.

The Treasury said around 200,000 UK businesses will be eligible for the business grants which will be administered by local authorities and will be available in the coming weeks.

The fund has so far awarded funding to 5,000 organisations.

The Treasury said the top-up will enable more cultural organisations in England to apply for support during the winter.

When will restrictions be tightened?

Meanwhile, pressed on whether further restrictions this side of New Year in England could be ruled out, the chancellor reiterated that there is “an enormous amount of uncertainty at the moment” and said ministers are “keeping the situation under constant review”.

Boris Johnson has held off on introducing new restrictions in England after resistance from members of the cabinet, who demanded more evidence on the severity of Omicron.

The prime minister said on Monday that he reserved “the possibility of taking further action” and that the situation was “very finely balanced”.

The prime minister said ministers were considering “all kinds of things to keep Omicron under control and we will rule nothing out”.

Scientific advisers are understood to favour an immediate bolstering of COVID rules to prevent a potential surge in hospital admissions – but it is believed a significant number of the cabinet remain sceptical.

Responding to the announcement, Mr Johnson said: “With the surge in Omicron cases, people are rightly exercising more caution as they go about their lives, which is impacting our hospitality, leisure and cultural sectors at what is typically the busiest time of the year.

“That’s why we’re taking immediate action to help with an extra £1 billion in grants to these industries and reintroducing our Statutory Sick Pay Rebate Scheme.”

But shadow chief secretary to the Treasury Pat McFadden said the announcement was “a holding package from a government caught in a holding position”.

“The real question after yesterday’s indecisive cabinet meeting is what will happen next, when will the country be informed of that, and will support for businesses and workers be placed alongside any further public health measures that might be announced,” he said.