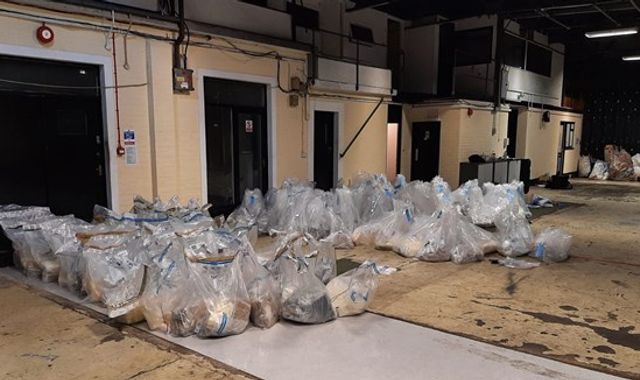 A port worker and six others were arrested after 1.2 tonnes of cocaine was found hidden in a banana shipment.

Sheerness Port was targeted by more than 100 officials from the National Crime Agency (NCA) and Kent Police in the early hours of Monday.

The operation came after a long investigation into an organised crime group suspected of plotting with a port security guard to smuggle huge amounts of Class A drugs into the UK via Sheerness.

Six men, including the 27-year-old security guard, were arrested at the port.

Another man was arrested in Hertfordshire and a number of properties were also raided.

All seven men were charged with conspiracy to import Class A drugs and were due to appear at Medway Magistrates Court on Tuesday.

The NCA believes the drugs, which have an estimated street value of more than £90million, were smuggled on a boat carrying a banana shipment from Costa Rica via Panama.

They believe the boat has now sailed elsewhere.

In July the NCA warned that furloughed port and airport staff could be vulnerable to criminals trying to exploit the coronavirus pandemic.

NCA regional head of investigation Jacque Beer said: “Our investigation has focused on what we believe to be a dangerous group intent on importing large amounts of drugs to the UK, using insider contacts within the port.

“We know that criminal gangs target insiders within ports and airport for their knowledge and access.

“While it is rare, when it happens it represents a disproportionately large threat, which is why it is such a focus for the NCA.

“We believe this activity has thwarted those intentions and led to the dismantling of the network involved.

“This was a major operation involving a large number of law enforcement officers from the NCA, our Kent Police colleagues and Border Force, who I’d like to thank for their assistance, as well as the port operator.”

Minister for security and borders Damian Hinds added: “This seizure has prevented a significant amount of dangerous drugs from ending up on our streets, which not only reduces the harm they cause to communities but also makes a huge dent in the profits of smugglers.”

Share
Facebook
Twitter
Pinterest
WhatsApp
Previous articleCOVID-19: Wales to ban fans from stadiums to fight Omicron – but England coronavirus rule changes ‘unlikely before Christmas’
Next articleTen most complained about television shows of 2021 have been revealed