Levelling Up: Areas with high levels of deprivation suffered the most from austerity 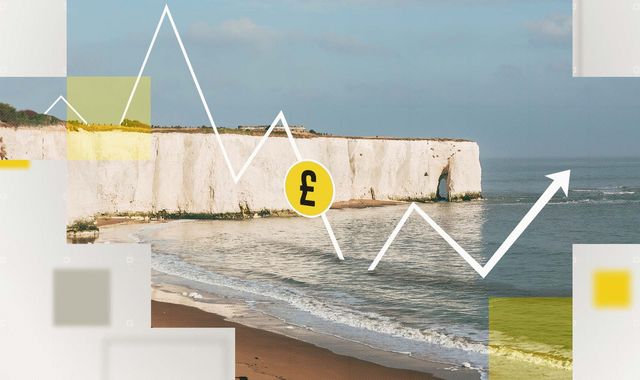 In the third and final article in our series about levelling up we take a look at the relationship between areas that won funding and those that experienced the largest fall in council budgets since 2010.

New Sky News analysis has found that the parts of England with the highest levels of long-term deprivation suffered the most from austerity.

Earlier this week, we explained how the government is now pumping money back into these left-behind places using the new Levelling-Up Fund.

But this only addresses part of the problem. Today, we’ll explain how changes to local government funding have made it harder for councils to provide the services needed to tackle deprivation in the local community and the knock-on impact for levelling up.

Our analysis found that for the most deprived 10% of local authorities spending power per person fell by almost two-fifths between 2010 and 2021, twice as much as it did for the least deprived 10%.

You can see this in the chart below. Each blue dot is a council in England. Those further to the right have higher levels of deprivation, while dots lower on the chart have experienced larger funding cuts.

So, why did more deprived areas experience bigger cuts?

To see the impact on levelling up, you need to understand changes to council funding over the past decade.

Needs-based grants from central government used to be the largest source of revenue for councils. Now, they rely far more on council tax and retained business rates levied on residential and commercial properties in their area.

This has tied council budgets much more closely to the wealth of the local area.

Jessica Studdert, deputy chief executive at think tank New Local, says that poorer areas have lost out from this because of lower property values.

“More deprived areas will not be able to raise as much,” she says, adding that “any discrepancies have become magnified” over the past decade.

In part, this is because council tax bands are still set according to 1991 house prices and the gap between the most and least expensive houses has widened dramatically since then.

The Institute for Fiscal Studies (IFS) found that using up-to-date property values would reduce bills by an average 20% across most of the north of England and the Midlands.

The chart below shows how more deprived areas have lost out. Central grant funding – the part of their income determined by local need – now represents only around a quarter of the total, while the amount determined by local wealth is almost three times larger.

This does not present as much of a problem for affluent areas as they have more wealthy residents and businesses to draw on, but it has made it harder for poorer areas to raise the money needed to tackle long-term deprivation.

Will levelling-up funding plug the gap from a decade of cuts?

Thanet, a coastal local authority in Kent, received £26m from the first round of the Levelling-Up Fund, but has experienced one of the largest cuts to its funding over the past decade. Its real per person spending power in 2021 was 29% lower than it was in 2010.

“We don’t have the benefit of having higher value properties in our area [and] business rates growth is really low,” he says.

This has had a direct impact on the council’s ability to invest in regeneration and growth.

“Our economic development team was reduced a number of years ago and is now run on a shoestring,” says Blundell. “Tourism and coastal development are important areas for us but we don’t have the resources to fund them properly anymore.”

In addition to the money from the Levelling-Up Fund, Thanet has received a further £26m from other central government streams such as the Towns Deal.

While the investment is welcome, Mr Blundell says that it does not plug the hole in the council’s revenues.

“We don’t have free rein to determine how we’re going to spend that money locally and a lot of it is of a capital nature,” he says, adding that had funding not been cut, local infrastructure would likely be in better condition and so need less overall investment.

He adds: “We’re still facing significant funding pressures on our annual revenue budgets and expecting to make a further cut next year.”

Thanet is not the only council struggling with funding. The Local Government Association estimates that the Chancellor’s recent local government funding commitment is just 62% of what is needed to keep services at 2019/20 levels of quality and access – and that does not take into account the cost pressures from growing demand and the pandemic.

New Local’s Jessica Studdert says that increasing council funding is an integral part of levelling up the country.

“The central government has taken money away with one hand and is now pumping it back in a different way, packaging it up as new cash injections that they take credit for,” she says. “Arguably, it would be better just to resource areas sufficiently so they can invest wisely and predictably.”

A spokesperson from the Department for Levelling Up, Housing and Communities said: “The government has made available an increase in core spending power in England from £49 billion in 2020-21 to up to £51.3 billion in 2021-22 – a 4.6% increase in cash terms.

“Funding baselines for every authority are determined by an assessment of the relative needs of areas, including measures of deprivation, and councils in the most deprived areas of the country receive 16% more in core spending power than the least deprived areas.”

This is the final article in our series about levelling up. To read more on where the funding is going and how the pandemic has affected the picture of need, see the first two articles in the series:

Levelling-up: where is the money going and how effective will it be?

Has COVID-19 changed the maths for levelling-up funding?