COVID-19: What potential COVID restrictions could Boris Johnson introduce – and when? 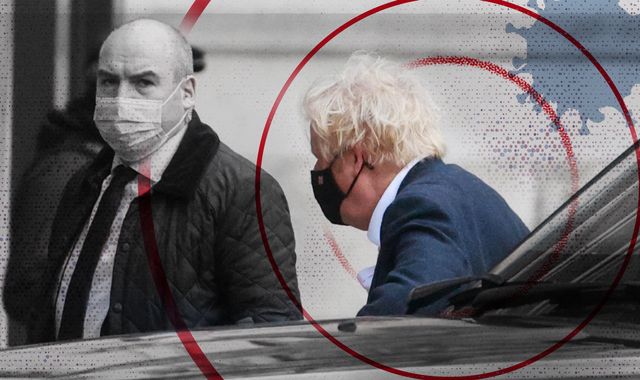 As Omicron cases rise rapidly across the country, Boris Johnson has reportedly been presented with options for further restrictions in England – including a full lockdown.

Scroll down for options the PM was presented with

Mr Johnson said he was not announcing any further restrictions on Monday after the cabinet meeting but “reserved the possibility” to do so as ministers keep the data under review “hour by hour”.

Deputy Prime Minister Dominic Raab told Sky News he could not make “hard, fast guarantees” that more restrictions would not be needed before Christmas.

Mr Johnson is understood to have been presented with options to tackle the growing number of cases by officials as well as another option, according to the Daily Telegraph.

Families would be asked to limit indoor contacts by the government, but it would not be mandatory under law.

This would be similar to Scotland after First Minister Nicola Sturgeon asked people last week to limit socialising to just three households over the festive period.

On Tuesday she asked people to stay at home and reduce contact with others as much as possible for at least three weeks from 27 December.

As it would just be guidance and not legally enforceable, parliament would not have to be recalled for Mr Johnson to make an announcement, meaning this option could easily be implemented before Christmas.

Households would be limited from mixing – this could mean a return of the rule of six or people from different households not being able to mix indoors at all.

It could also mean a limit on mixing outdoors as well.

Social distancing and an 8pm curfew on pubs and restaurants would also return under this option.

As these would be mandated rules, parliament would have to vote on them which would mean MPs being recalled to Westminster from their Christmas break, which started on Friday.

This is unlikely to happen before Christmas as 48 hours is needed to recall parliament.

Sky News has been told House of Commons authorities believe MPs could be recalled to return to parliament on 29 December to vote on restrictions.

A fourth national lockdown would see people instructed to stay at home unless for certain reasons such as shopping for basic necessities, caring for a vulnerable person, going to work, seeking medical assistance or meeting a support bubble or childcare bubble.

In previous lockdowns in England, all primary schools, secondary schools and colleges moved to remote learning and all non-essential retail, hospitality and personal care services were forced to close.

Restaurants were allowed to continue offering delivery and takeaway services, but selling takeaway alcohol was banned.

Entertainment venues and indoor and outdoor sports facilities were forced to close but places of worship and essential shops and garden centres could remain open.

This is also unlikely to happen before Christmas as MPs would have to vote for it.

Ministers are said to also be considering imposing restrictions from Boxing Day, which could see pubs and restaurants having to close. This is likely to be a more preferable option for the scientific advisers who are understood to favour an immediate bolstering of COVID rules to prevent a potential surge in hospital admissions.

It would allow people to enjoy Christmas Day with their families with restrictions then introduced immediately afterwards.

Another option is to wait a few more days and to announce a two-week “circuit breaker” just before the New Year.

Government sources say a change before Christmas is now “highly unlikely”, and according to The Times and the Daily Mail, ministers could impose harsh restrictions for a two week period from 28 December to try and lower infection rates.

This could see all hospitality venues either closed or restricted to outdoor service, while people would be told to work from home where possible and to not mix with other households.

What are the rules in the devolved nations?

First Minister Mark Drakeford has announced that spectators will be banned from all sports events in Wales – both indoor and outdoor – from 26 December.

Mr Drakeford has also asked people to socialise less over the Christmas period.

Currently, individuals in Wales need an NHS COVID pass to gain entry into nightclubs, cinemas, theatres and other entertainment venues.

The guidance is to work from home wherever possible, face coverings are compulsory in schools, on public transport and in shops and hospitals and there is guidance to where them in hospitality venues when not eating or drinking.

First Minister Nicola Sturgeon has asked people in Scotland to limit social contact to two other households over the Christmas period.

But for three weeks from 27 December people are being advised to stay at home and reduce their contacts with others as far as possible. Employers have been told they will have a legal duty to let staff work from home.

Table service will resume in pubs and restaurants from the same date and no more than three households will be able to sit together.

Hospitality venues will also be required to ensure a one-metre distance is maintained between tables.

The two-metre social distancing rule remains in healthcare settings and care home residents are only allowed visitors from two households who must be tested before entering.

Face coverings are mandatory on public transport and in most indoor spaces and school staff and pupils are instructed to wear them indoors.

People are required to prove they have been vaccinated or to show a negative coronavirus test upon entry to nightclubs and other venues and indoor hospitality venues have been instructed to collect customer details.

But public events will be capped at 500 for three weeks from 27 December, while numbers at indoor events are to be limited to 100 standing or 200 seated. The restrictions do not apply to private events such as weddings.

If someone tests positive for COVID-19, everyone in their household must isolate for 10 days – regardless of vaccination status and even if they test negative themselves.

In Northern Ireland, there is a 30-person limit on people from different households mixing in homes.

Face coverings are compulsory in shops, indoor venues and on public transport – and all pupils above primary school age must wear them inside school buildings.

People have been instructed to work from home where possible and a COVID passport scheme is in place for venues including nightclubs and bars.

In Ireland, restaurants and bars, excluding takeaways and delivery services, now close at 8pm, with no indoor events after this time.