COVID-19: Cutting self-isolation period from 10 days to seven would only be safe on one condition, expert says 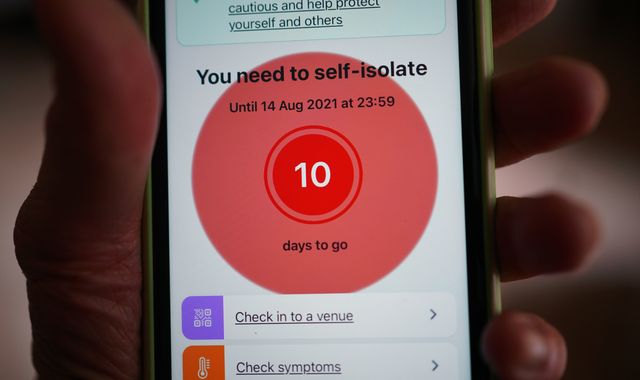 Cutting the coronavirus self-isolation period would only be safe if lateral flow tests were made compulsory on the final day, an expert has told Sky News amid reports the government is considering the move.

Health Secretary Sajid Javid is asking scientists for “rapid advice” on whether to reduce the quarantine period from 10 days to seven, according to The Daily Telegraph.

It comes in response to warnings that the NHS, social care and other frontline services are already facing chronic staff shortages due to the rapid spread of the Omicron variant.

Asked whether the proposed measures would be safe, Professor Andrew Preston said: “If combined with a negative lateral flow test to release people on day seven, then yes.

What restrictions could Boris Johnson bring in over Christmas?

“It seems like a good compromise between asking people to isolate and trying to make it as palatable as possible to minimise the effects of another so-called ‘pingdemic’.”

But the reader in microbial pathogenicity at the University of Bath stressed that testing for infectiousness on day seven would be extremely important.

“Just going on day count is not particularly robust if people still have symptoms beyond day seven,” he said.

“So that negative lateral flow test is very important, otherwise it will be less effective.”

The COVID isolation period was reduced from 14 days to 10 this time last year as the Alpha variant spread rapidly through parts of the UK.

Professor Preston explained: “That was based on the epidemiology pointing towards people being infectious around the time they started to show symptoms.

“There was some suggestion some people were infectious before the onset of symptoms, but that was a small number.

“We suspect that people are infectious as long as they have symptoms.”

Mandatory isolation was dropped for vaccinated close contacts of a positive case during the Delta wave this year.

That has now been replaced with daily lateral flow testing.

Meanwhile, the government is under increasing pressure from scientists to make a decision on further restrictions to slow the spread of Omicron.

Boris Johnson said yesterday that data on the new variant was coming through “hour by hour”, warning more restrictive measures could be imminent.

“Unfortunately, we will have to reserve the possibility of taking further action to protect the public, public health and our NHS,” he said.