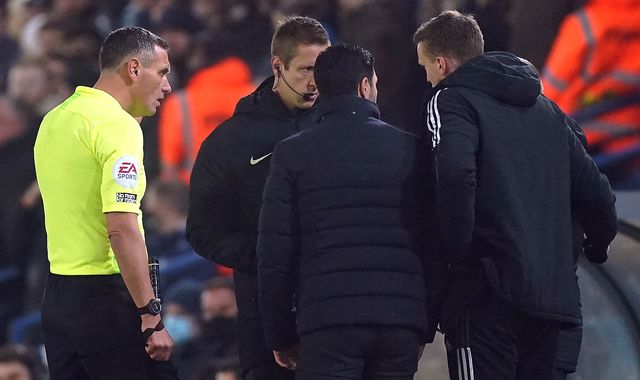 The Football Association is investigating alleged racist abuse that was hurled towards Arsenal’s bench during the north London club’s 4-1 Premier League victory against Leeds on Saturday.

Leeds said one arrest had been made after the match at Elland Road was halted in the 34th minute, when the incident was reported by Arsenal substitute Rob Holding.

Holding has been praised by anti-racism organisation Kick It Out, which said: “His actions are a great example of taking a stand and being an ally to his team-mates.”

Arsenal boss Mikel Arteta also spoke out after the game, saying some unnamed players had been targeted by a fan.

“The players that were sitting on the bench. One of those heard those comments,” he said.

“I don’t know exactly (which player) it was, that’s why they will have to be interviewed by the authorities.”

Hosts Leeds condemned the incident in a statement, saying “any supporter found to be using racist language will be subject to a lifetime ban for all Leeds United games”.

The arrest has not yet been confirmed by the FA, the Premier League, or the police.

Arsenal were comfortable winners in the teatime fixture – the only match to take place in the Premier League on Saturday after COVID-19 outbreaks scuppered the rest of the schedule.

Leeds saw some improvement when Raphinha scored a penalty after the break, perhaps fearful of another crushing defeat that would echo the recent 7-0 loss against Manchester City.

However, substitute Emile Smith Rowe ended the game on a high for Arsenal with another goal.

Share
Facebook
Twitter
Pinterest
WhatsApp
Previous articleLevelling-up: Where is the money going and how effective will it be?
Next articleLove Island star Belle Hassan shares image of bruised eye after being ‘hit in the face for no reason’