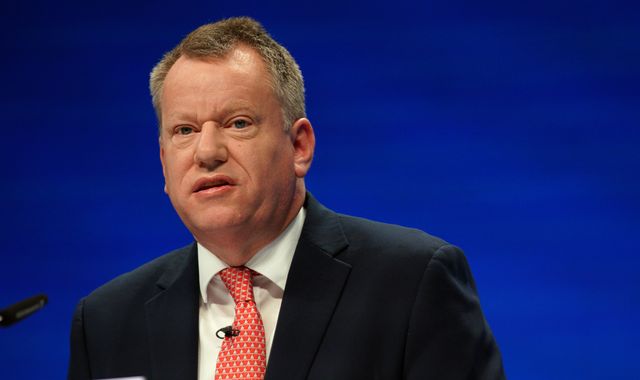 Boris Johnson’s Brexit minister has resigned from the cabinet.

Lord Frost quit in a letter to the prime minister last week, and will leave immediately rather than in January as was originally planned.

Sky News’ deputy political editor Sam Coates said that Lord Frost goes “on good terms”, but he is unhappy with the direction of government – high taxes, the push towards net-zero, and most recently COVID regulations.

In his resignation letter to Mr Johnson, Lord Frost appeared to take aim at the PM over his previous plan to make lockdown easing “cautious but irreversible“.

The now ex-Brexit minister said he believes we need to “learn to live with COVID”, telling Mr Johnson: “You took a brave decision in July, against considerable opposition, to open up the country again.

“Sadly it did not prove to be irreversible, as I wished, and believe you did too. I hope we can get back on track soon and not be tempted by the kind of coercive measures we have seen elsewhere.”

The prime minister responded by thanking Lord Frost for his “unique contribution towards getting Brexit done”.

Lord Frost’s departure has not gone down well with some Tory MPs, according to messages from a WhatsApp group seen by Sky News.

In the group, titled Clean Global Brexit, which has more than 100 MPs, the news is described as a “disaster” by Andrew Bridgen and “very worrying” by Theresa Villiers.

Culture minister Nadine Dorries appears to have been removed from the group after defending the prime minister, labelling him a “hero”.

“Enough is enough,” said Steve Baker, upon removing Ms Dorries from the chat.

“The country needs leadership not a lame duck PM whose MPs and cabinet have lost faith in him.”

The resignation is yet another blow for Downing Street, which has lurched from crisis to crisis in recent weeks, including the Christmas parties scandal.

Sky News understands Lord Frost, 56, is unhappy with the direction the government is taking.

He believes taxes under Mr Johnson are getting too high.

And Lord Frost is also said to opposed to the emphasis placed on the net-zero strategy to reduce carbon emissions.

But the final straw is said to be the re-introduction of COVID regulations due to the spread of the Omicron variant.

It comes amid ongoing wrangling over the Northern Ireland Protocol.

“Two months ago, the government was threatening to trigger Article 16, a mechanism for overriding the Protocol, over Unionist fears that the Irish Sea border was diluting Northern Ireland’s place in the UK,” he said.

“With the government having now backed away from that threat, Unionists say they had much more faith in the Brexit minister than they do in the prime minister.”

Sinn Fein, who welcomed the Protocol as “the best of both worlds”, giving Northern Ireland unique access to the GB and EU markets, say Northern Ireland “won’t be collateral damage in the Tory chaos.”

She tweeted: “The resignation of Lord Frost from the Cabinet is a big moment for the Government but enormous for those of us who believed he would deliver for NI.”

Sir Jeffrey said the government was “distracted by internal strife” as he suggested Lord Frost was “frustrated on a number of fronts”.