COVID-19: What does a ‘sensible’ Christmas look like as the Omicron variant spreads? 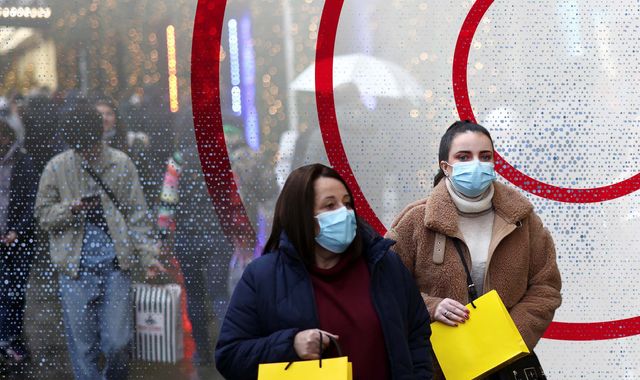 With Christmas fast approaching the government has asked people to be “sensible” over the festive period in response to the new Omicron variant.

Cases of the more transmissible strain are doubling every two days and ministers are urging people to be “sensible… but enjoy their Christmas”, as more vaccines and testing have put the UK in a “much better position” than last year.

Here Sky News asks scientists what a “sensible” Christmas should look like as Omicron spreads.

Should we meet up for Christmas?

As the Alpha variant spread in December 2020, large parts of England were put into effective lockdowns, with household mixing banned or limited.

In Scotland, the government is advising people to only meet indoors in groups of three households, while Northern Ireland still has a 30-person limit on gatherings.

In Wales from 27 December people are being urged to meet outdoors, maintain social distancing and space out social events, leaving a day between each – but not on Christmas Day or Boxing Day.

There is currently no official guidance on festive socialising in England.

“People need to think very hard about ‘how fewer people can I see this Christmas?” he told Sky News.

“If you have a large family, I can understand you wanting to see them, but those people should think even harder about cutting down their other contacts.”

Dr Deepti Gurdasani, an epidemiologist at Queen Mary University, said that given the “crisis” around Omicron, people should only meet with immediate family, if necessary.

“I know people want to meet friends at Christmas,” she said. “But given what’s at stake, I would highly recommend people don’t.

“The NHS is very likely to become overwhelmed. People are already having to wait longer for life-saving care, which with things like strokes or heart attacks mean a lower chance of survival or higher chance of disability. And people need to be aware of this.”

While a lockdown hasn’t been introduced to lower COVID rates this year, Dr Stephen Griffin, a virologist at the University of Leeds, said 2020’s ‘Tier 4’ was effective at reducing infections because it stopped people from travelling.

“Tier 4 is important to remember – all the other tiers didn’t work because they didn’t restrict movement,” he said.

“Plan B doesn’t come anywhere near what is needed at the moment with Omicron.”

He urged people not to visit loved ones in other parts of the country if possible, but recognises that many will need to be with their families for the sake of their mental health.

Dr English said that if you have to travel by public transport, a high-quality mask, hand gel and opening a window are all essentials.

“There are still lots of people on public transport who refuse to wear a mask and they are most likely to be infected without knowing it,” he said.

Christmas shopping – for food and presents – should be done online as far as possible, he added.

They also found them to be more than 90% effective at detecting people who are highly infectious, in turn reducing the possibility of the virus being passed on to someone else.

Dr English said: “Reduce your contacts and make those contacts safer by doing lateral flow tests before you see them. It’s not a guarantee you’re not infectious but the chances are pretty high.”

The UK Health Security Agency (UKHSA) claimed earlier this month that Omicron may have a shorter incubation period than previous variants.

This means less time between getting infected and becoming infectious, which would give LFTs more of a chance at detecting infectious people.

Almost all scientists stress the importance of wearing high-quality masks indoors or in crowded spaces.

Although most of the masks seen in shops and on public transport are FFP1 masks, FFP2 and FFP3 ones are easy to buy online and offer better protection.

Dr Griffin said: “FFP2 masks not only protect other people, they give you a degree of protection as well.”

Dr Tom Dolphin, a consultant anaesthetist at a London hospital, said masks should be warn in all “closed social settings”.

“If you like someone enough to spend time with them at Christmas, you should like them enough to wear a mask. It feels a bit weird at first, but it’s better than having COVID,” he told Sky News.

“Ventilation has been really undersold by the government,” according to Dr Dolphin.

The hospital consultant, who is also a member of the British Medical Association Council, said that just by opening windows and doors you can reduce the risk of spreading COVID at family events.

Dr Gurdasani added: “People seem to think if you’re two metres away from someone and you’re indoors you’ll be okay – that’s not the case.

“Many people are still only thinking about COVID being spread by droplets – not aerosols.

“The virus spreads like smoke. So if there was someone smoking in a room, you would open a window or wear a mask to stop you inhaling that smoke – you can think of it like that.”

Air filtration devices can also help increase airflow and reduce the risk of the virus lingering in people’s homes.

Social distancing has not been mandated outside healthcare settings in England since July. It is being reintroduced in Wales from 27 December.

Dr Griffin said that even elderly or clinically vulnerable people who have had three doses of a vaccine are still not as well protected as the young and healthy.

So taking as many steps to protect the vulnerable as possible is better than just keeping your distance.

“If you’re both wearing a mask and are both vaccinated, a brief hug is probably going to be okay,” he said.

“But if you turn up feeling unwell, or you’ve just done a high-COVID risk activity, it most probably won’t be.”

“Nothing is absolute,” Dr Gurdasani added. “You need multi-layered mitigations.”

From 13 December, anyone over the age of 18 in England has been able to book or walk-in for a booster jab.

According to official guidance, vaccines are only effective after two weeks, but Dr English claimed they could be worth getting before Christmas as they can start to take effect after a few days.

“Within three or four days you’re probably going to get as much protection as you’re ever going to get from a booster,” he said. “So they can make a big difference in that time.”

But Dr Griffin cautioned: “Unless you’ve had your booster very recently, you’re as likely to be infectious at this point as you were in March 2020.

“Vaccines are fantastic, but they’re not enough on their own.”