COVID-19: London mayor ‘incredibly concerned’ about the number of people with Omicron in the capital 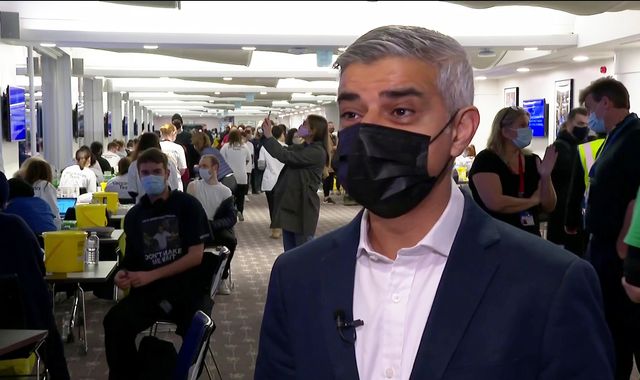 London’s mayor has said he is “incredibly concerned” about the increase of Omicron cases in the capital.

Speaking to reporters from Stamford Bridge, Sadiq Khan also said Omicron is now the “dominant variant” in the city.

He added that he was “incredibly worried” about staff absences in the NHS, fire service and the police force due to the number of COVID-19 cases.

“The big issue we have is the number of Londoners who have this virus and this is leading to big issues in relation to staff absences and the ability of our public services to run at the optimal levels,” he said.

His remarks come as the latest figures show the number of COVID patients in hospital across London has climbed to 1,534 – a 28.6% increase on last week.

The government’s COVID dashboard showed that 341 more people with the virus were in hospital in the capital on 17 December – up from 1,193 on 10 December.

Mr Khan said: “Now we are the region with the largest number of (COVID) cases. Omicron is now the dominant variant and over the last 24 hours we have had 27,000 new cases of COVID and over the last week that figure is 70,000.

“I’m incredibly concerned about the number of Londoners with this variant but also the impact on our hospitals. Hospital admissions are now going up as well.”

Mr Khan went on to urge those who are eligible to get a booster jab. and for others to make sure they are vaccinated.

“So reaching out to those communities… to explain why the vaccine is important and to make sure nobody is left behind and we are making sure more Londoners get the first dose.”

However, he said more than 15.4 million vaccines have been given out in the city, with 87% of over 16s receiving one dose and 94% of those aged over 40 being double jabbed.

Staff will be vaccinating at about 2,900 places on Saturday and Sunday, said NHS England.