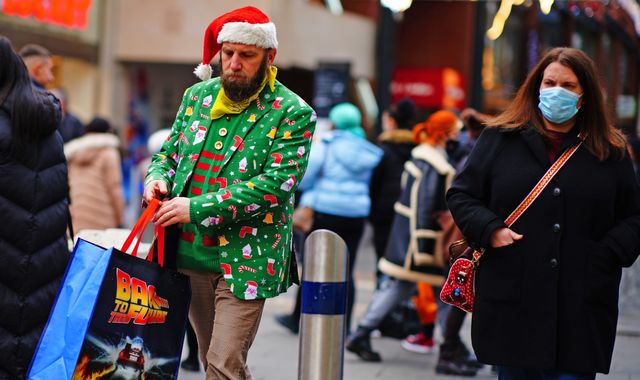 Extra restrictions are needed within days to prevent hospitals from being overwhelmed by Omicron, according to senior government scientists.

Even if transmission of the variant stopped now, a significant number of hospital admissions are already baked in.

Are we heading for a ‘circuit breaker’?

SAGE’s documents have emerged amid reports ministers are drawing up plans for a so-called circuit breaker.

Both The Times and Financial Times have detailed the potential new restrictions, which could come into force for two weeks after Christmas.

It’s suggested that a return to the measures that we were living with in April – under step two of the prime minister’s roadmap out of lockdown – would be needed to stop hospitals being overwhelmed.

Pubs and restaurants could only serve at tables outside, and indoor mixing with other households was banned.

However, one government source told Sky News earlier that not enough was known about the impact of Plan B and the booster programme yet.

The cabinet did meet on Saturday, but only to be briefed on the latest COVID data, rather than to discuss any potential new measures.

Daily Omicron cases tripled on Saturday to more than 10,000 and total infections struck 90,000 for a second day, with a major incident declared in London as the capital grapples with the country’s biggest outbreak.

How is the booster campaign going?