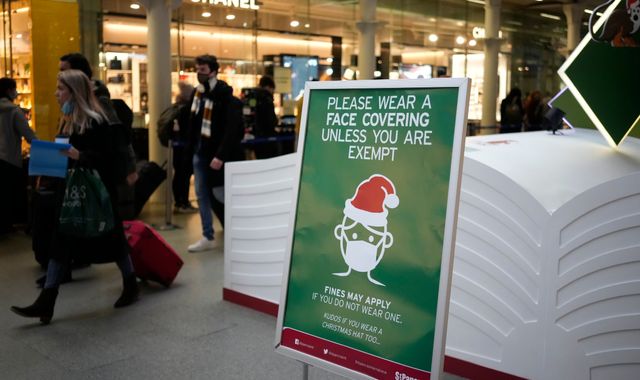 More than 10,000 new Omicron cases have been reported in the UK in the highest increase so far – as the number of overall COVID infections exceeded 90,000 for the second day running.

The UK Health Security Agency confirmed an additional 10,059 cases of the new variant, three times as many as yesterday (3,201) and taking the total number detected to 24,968.

Another 90,418 overall COVID infections have also been reported – an end to three successive rises, but only the second time cases have been higher than 90,000.

The government’s coronavirus dashboard shows 125 more deaths within 28 days of a positive test – up on Friday’s 111 but down on the 132 reported last Saturday.

It comes as London’s mayor has declared a major incident in the capital over the “huge surge” in cases of the new variant.

Sadiq Khan said he has been meeting with colleagues from the NHS, councils and the fire service about the rise in infections of the COVID variant.

While no new measures have been announced, he said: “Hospital admissions are going up but also staff absences are going up by massive levels, so I have taken the decision, along with our partners, to declare a major incident.

“This is a statement of how serious things are, but also it means rather than different public authorities working separately we will be working together through both the London Resilience Forum and also through the strategic co-ordinating group.”

He urged Londoners to get vaccinated against the virus and to get their booster jabs when they are eligible.

“It is really important Londoners understand how serious things are. The best thing Londoners can do is to get both vaccines and the booster, they provide extra layers of protection,” Mr Khan said.

Will there be tougher restrictions after Christmas?

Meanwhile, reports suggest government officials are drawing up plans for two weeks of tougher restrictions after Christmas, which could include a ban on indoor mixing.

Draft regulations are being prepared which would ban people meeting indoors, except for work, and force pubs and restaurants to only provide outdoor services, according to The Times.

The prime minister has also been presented with a number of options ranging from “mild guidance to nudge people, right through to lockdown”, the Financial Times reported.

Sky News understands Boris Johnson’s cabinet is being briefed on the latest COVID data this afternoon, with officials said to be concerned after three consecutive days of record case numbers.

Share
Facebook
Twitter
Pinterest
WhatsApp
Previous articleCOVID-19: What ‘Plan C’ restrictions could we see if Plan B fails to curb the spread of Omicron?
Next articleCOVID-19: Mayor of London Sadiq Khan declares major incident over ‘huge surge’ of Omicron cases