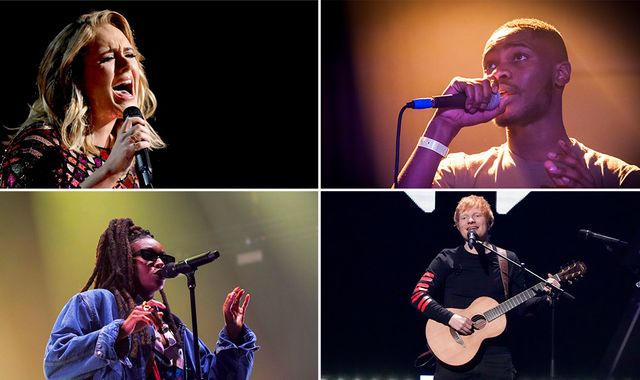 Gone are the best male and female categories, with new broader groups created that includes all artists, regardless of their gender.

Adele, Dave, Little Simz and Sheeran all have four nominations, including in both artist of the year and album of the year, where they will go up against Sam Fender – who bags three nominations.

Newcomer Central Cee also lands three nods – in the new artist group, song of the year for Obsessed With You, and in the newly-created hip hop, grime, and rap category.

Song of the year is hotly contested too with 15 acts nominated (which were determined based on UK chart position during the year) and includes the likes of Elton John and Dua Lipa, KSI and A1 & J1.

Elsewhere, Coldplay get two nominations in the rock and alternative and best group categories, as does the newly independent Raye, who is up for best dance act and best song.

Internationally, Eurovision winners Maneskin round out their huge year and earn two nods in the overseas group and song categories.

Lincolnshire singer-songwriter Holly Humberstone has already been announced as the winner of the highly coveted rising star award, following in the footsteps of the likes of Adele, Sam Smith and last year’s winner Griff, who has bagged two nominations this year.

It’s not only the awards categories which have been overhauled – there are new hosts too.

Maya Jama, Mo Gilligan and Clara Amfo will present the awards for the first time at the O2 Arena next year.

The awards will be broadcast on ITV and ITV Hub on 8 February 2022.