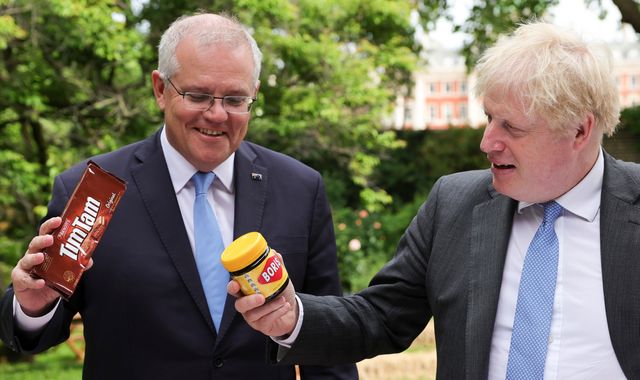 The UK and Australia have finally signed a trade deal after months of negotiations, it has been announced.

The government hailed the agreement as the first “from scratch” post-Brexit trade deal, as other agreements recently signed by the UK have largely been rolled-over deals from the country’s previous EU membership.

International Trade Secretary Anne-Marie Trevelyan described a “landmark moment in the historic and vital relationship” between the UK and Australia.

Her department estimates the deal will unlock £10.4bn of additional trade.

It is also claimed the agreement will increase trade with Australia by 53%, boost the UK economy by £2.3bn and add £900m to household wages “in the long-run”.

But the government’s own estimates suggest that the overall effect on the UK economy is likely to be small, with a projected increase of between 0.01 and 0.02% of GDP.

This is partly because Australia only accounts for 1.7% of UK exports and 0.7% of imports – and tariffs on most UK-Australia trade are already low.

But the deal could benefit some sectors of the UK economy, despite some concerns about its impact on British farmers and on climate action.

The final deal was signed in a virtual ceremony by Ms Trevelyan on Thursday night.

She said it demonstrated “what the UK can achieve as an agile, independent sovereign trading nation”.

“This is just the start as we get on the front foot and seize the seismic opportunities that await us on the world stage,” Ms Trevelyan added.

The government also touted the UK-Australia agreement as a “gateway” to the Indo-Pacific region, while ministers hope it will also boost the UK’s bid to join the CPTPP pact – a free trade agreement between Canada, Mexico, Peru, Chile, New Zealand, Australia, Brunei, Singapore, Malaysia, Vietnam and Japan.

The UK and Australia reached an “agreement in principle” in June, when Australian Prime Minister Scott Morrison met Boris Johnson in London.

However, since then they have been arguing over the legal text of the 32 chapter draft agreement.

The wrangling is believed to have been over tariff rates for different cuts of meat and a deal to see people under the age of 35 being able to get working visas more easily.

Labour vowed to scrutinise the details “very carefully” and hold the government to promises made to farmers, as well as ministers’ environmental pledges, and assurances on food and drink standards.

However, he said it makes “no mention of climate targets or the impact of the removal of import tariffs on UK agriculture”.

Lord Karan Bilimoria, president of the Confederation of British Industry, welcomed the deal as opening up “new frontiers for British businesses”.

“This agreement sets the bar high, with a complete elimination of tariffs that will boost UK exports, improving the ability for those in business and our young talent to move across borders and the first ever innovation chapter that will give the UK a leading role in shaping future digital standards,” he said.

What is in the agreement?

According to the Department for International Trade, the agreement will:

• give UK firms guaranteed access to bid for an additional £10bn of Australian public sector contracts per year;

• allow young people to work and travel in Australia for up to three years at a time, removing previous visa conditions;

• allow UK architects, scientists, researchers, lawyers and accountants to have access to visas to work in Australia without being subject to Australia’s changing skilled occupation list;

• remove tariffs on all UK exports, making it cheaper to sell products like cars, Scotch whisky and UK fashion to Australia, while making Australian goods like Jacob’s Creek and Hardys wines, Tim Tams and surfboards more accessible for British consumers.

Deal ‘fails to protect our farmers’

UK farming groups fear the removal of all tariffs and quotas could lead to an increase in imports from Australia.

They also fear the agreement will set a precedent for future trade deals with major agricultural exporters, including concerns over a compromising of the UK’s animal welfare, environmental and food standards.

Tim Farron, the Liberal Democrats’ rural affairs spokesperson, said it “fails to protect our farmers in the long-term”.

“The Conservatives make promises of transitions, but all that means is delaying the inevitable – our farming communities being undermined by imported food that is produced to lower standards of animal welfare and environmental protection,” he added.

Some of the trickiest issues during the legal text discussions have been over climate targets.

In September, Sky News saw a leaked government email showing ministers agreed to bow to pressure from Australia to drop binding commitments to the Paris climate change agreement from the trade deal.

Environmental groups questioned the government’s commitment to climate change goals and whether trade will always win over the environment.

Greenpeace UK executive director John Sauven said: “The UK government has just struck a trade deal with not only one of the world’s worst climate laggards but a country that’s been declared a deforestation hotspot.

“What people will want to know is whether this trade deal will stop beef from farms involved in destroying habitats for koalas and other endangered species from reaching our supermarket shelves.

“And whether Boris Johnson has used his clout to confirm a commitment to the Paris goal of keeping the global temperature rise to within 1.5C.”