Thomas Schreiber: Man convicted of murdering one of UK’s wealthiest men Sir Richard Sutton and trying to kill his own mother 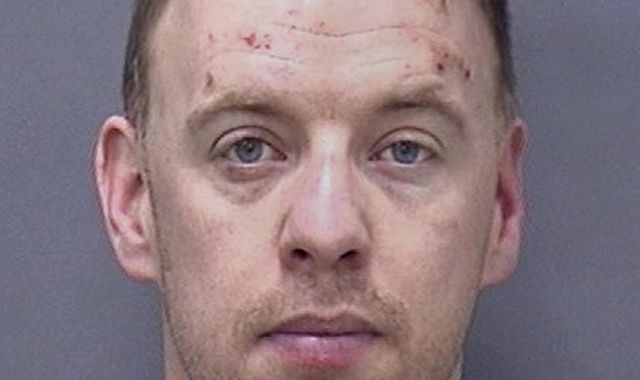 A man has been found guilty of murdering one of Britain’s wealthiest men, Sir Richard Sutton, and attempting to kill his own mother.

Thomas Schreiber was convicted following a three-week trial at Winchester Crown Court, which heard how he stabbed the millionaire hotelier and his wife, Anne Schreiber, at their Dorset country estate on 7 April, 2021.

The 35-year-old closed his eyes as the majority guilty verdict was announced.

A cry of “Yes” was heard from the public gallery, where some members of the family were sitting.

Others, including the defendant’s mother who he was convicted of trying to kill, watched by video-link.

Adjourning for sentencing on Monday, Mr Justice Garnham told Schreiber: “The only sentence I can pass is of life imprisonment but for the offence of murder I have to set the minimum number of years and I also have to sentence you for the attempted murder of your mother.”

Sir Richard’s family said in a statement: “How could any family recover from such a sudden and devastating loss.

“We can never bring back Sir Richard but his spirit will very much live on, alongside the very happy memories we have of our incredible father, brother and grandfather.

“His values of being warm, generous and compassionate to everyone he met will be carried forward by future generations, and will never be extinguished.”

Schreiber admitted carrying out the “horror show” knife attack on the pair on the eighth anniversary of the death of his alcoholic father, David Schreiber, after he said his mother shouted at him for being “drunk like his father”.

He had admitted manslaughter but denied the murder of Sir Richard, saying he had “lost control” of himself and had not intended to hurt him or his mother.

Ms Schreiber suffered up to 15 separate injuries on her head and body, including a partially severed spinal cord which has left her paralysed.

Sir Richard suffered three deep wounds to his face and five to his chest, up to 12cm deep.

Schreiber had also pleaded guilty to driving a Range Rover dangerously on the A303, A4 and M3 when he failed to stop for armed police in a 135mph pursuit into central London.

As he was detained in Chiswick, the defendant stabbed himself in the chest and told officers: “Please kill me now, please just shoot me.”

The trial heard the defendant was angry with his mother for “abandoning” his father, who suffered from depression, to move in with Sir Richard and accused her of being a “gold-digging b*****”.

Schreiber, an aspiring artist, also felt Sir Richard treated him unfairly compared to his two sisters despite him receiving a £1,000 monthly allowance and £100,000 towards buying a house.

The defendant blamed lockdown for worsening his mental health by forcing him to remain in the “toxic pressure boiler” environment of Sir Richard’s estate.

In March 2021, he had written to a friend: “I’m so sad to report that my mind is consumed with hatred of the very worst kind towards my family.

“They really hurt me, betrayed me and destroyed all trust. Simply put, I contemplate murdering them all, morning, day and night. It’s not what I want to think about but it’s the truth. I want them to suffer.”

Detective Inspector Simon Huxter, of Dorset Police, said: “This was an utterly tragic and senseless incident that has left Sir Richard and Anne’s family and friends devastated and our thoughts remain with them at this extremely difficult time.”

According to The Sunday Times, Sir Richard’s fortune was worth an estimated £301m in May 2020, making him the 435th-wealthiest person in the country.

The entrepreneur owned the five-star Sheraton Grand and Athenaeum hotels on London’s Park Lane and had an extensive property and farming portfolio.

Share
Facebook
Twitter
Pinterest
WhatsApp
Previous articleStrictly Come Dancing’s AJ Odudu pulls of competition the day before the final due to injury
Next articleRail fares to rise by 3.8% in March in biggest increase since 2013