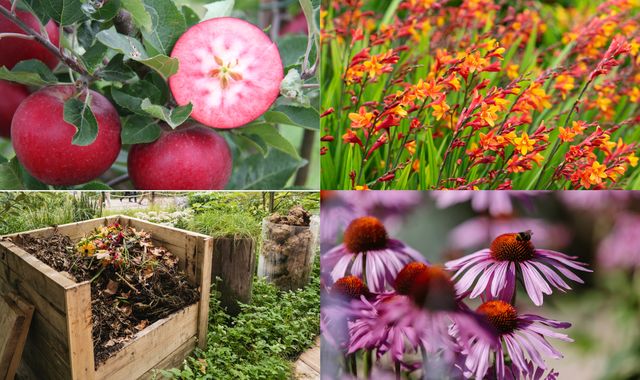 Bright, bold colours, “Snow White” apples and eco-friendly gardening are expected to be among the trends for 2022, according to the Royal Horticultural Society (RHS).

The charity has put together its predictions for what will be popular in the new year, based on gardener inquiries and views from experts.

More confident colours, such as reds, oranges and purples, are expected to be popular, with plants such as crocosmia, salvia, canna and varieties of echinacea among the trends.

The addition of colour could even extend to fruit trees, with red-fleshed “Snow White” apples becoming more common in gardens after the success of newly introduced varieties “Tickled Pink” and “Surprise”.

The “Snow White” apple is high in anthocyanins thought to have anti-inflammatory and anti-viral qualities.

Gardeners are also expected to try out growing more exotic fruits such as pomegranates, chokeberries and serviceberries.

After lockdown, a return to more office working means people have less time to tend to gardens, prompting a spike in the labour-saving kits, such as pre-plants baskets and troughs, self-watering pots and battery-powered pruners.

But for those with time to spare, learning a new skill is on the agenda, with many gardeners keen to lessen their impact on the environment, the RHS said.

That could see a resurgence in home composting techniques, and even a focus on scything which is easier than a mower on wildflower patches and reduces the need for petrol or diesel-powered tools, the charity said.

Flowers could also share the vegetable patch with food crops in 2022, as people respond to the carbon footprint of shop-bought cut-flower bouquets by growing their own.

Plants such as cosmos, dahlias and zinnia that repeatedly flower could be grown for summer displays, while sea lavender and everlasting flowers work well for winter in dried arrangements.

Guy Barter, the chief horticulturist for the RHS, said he expects people to embrace new ways of growing and this could include people “investing in cold frames, raised beds, conservatories, greenhouses and sheds in order to grow more efficiently, tools that make light work of seasonal tasks such as pruning, and concentrating their efforts on reducing, reusing and recycling”.

“That might include putting leftovers and waste to better use in the form of composting – the perfect season to get started with leaf litter still to be found – and own-grown bouquets for indoor and outdoor enjoyment all year long,” Mr Barter said.

“With a return to more normal weekday patterns in 2021, the UK’s gardeners are adapting their approach to tending their plants; drawing on quick fixes where necessary but all the time working to ensure their plots are planet friendly and an inspiring place to work and play.”