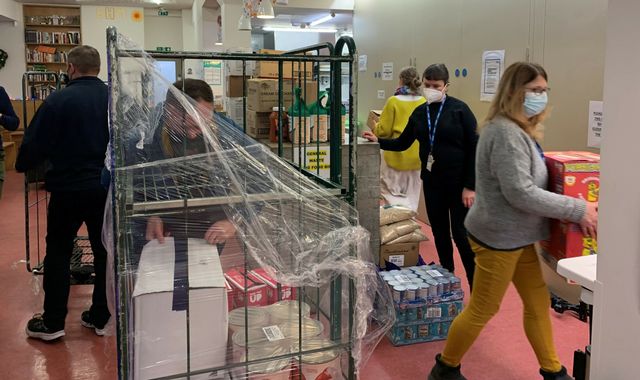 Hospitality venues across London are donating unused and wasted food and produce to charities and shelters amid festive party cancellation chaos.

As thousands of bookings are shelved, postponed and called off due to fears about the rapid spread of the Omicron COVID variant, event companies and restaurants are donating their waste to worthy causes.

The Big Top at Bloomsbury is one of the most popular Christmas party venues in London.

In town for six weeks, their money-making time is finite but rather than picking up the phone to receive last-minute bookings, this past fortnight they have been fielding calls from those cancelling their festive gatherings.

Corporate companies who had booked tables with food and drink at the venue are now cancelling with barely 24 hours’ notice.

On Monday, 350 people were booked at the venue but only 37 turned up.

Tonight – the biggest Christmas party night of the calendar – the team were due to entertain 1,000 guests. Overnight the number halved, and now with hours to go before the event, director of Awesome Events, Denis McCourt says they will be lucky to get 120.

Speaking to Sky News, Mr McCourt says so much food and produce has been paid for but now isn’t being used.

He said: “We don’t know how many people are going to come to each event anymore. We try contacting everyone to say ‘look, can you let us know early doors so we don’t waste food’ but some just don’t turn up at all.

“We’ve had thousands of cancellations. Our fridges are stocked with trays of chocolate brownies, potato rostis, seared chicken, frozen turkey breasts and so many vegetables.”

The food for the three-course menu is ordered and stands waiting to be cooked and served. Trays of potato rostis and huge packs of chicken breasts fill the giant walk-in freezer and fridges. It’s all fresh but is now completely wasted.

“It’s disgusting when we have 600 people we’re preparing meals for, that don’t get served and we have to throw it away at the end of the night when we have people literally a stone’s throw from here where they haven’t got any food,” Mr McCourt added.

The team has decided throwing it away won’t be an option if it can be helped. They’ve contacted charities across London and are donating the unused produce.

Businesses frustrated at lack of government support amid Omicron wave

From Great Ormond Street Hospital, Crisis at Christmas to the Chelsea and Westminster Foodbank, the unwanted fresh food and stock has been delivered and rehomed at multiple venues across the capital.

But this is far from the team behind the event’s first charitable venture. Even the site the venue is built on has benefitted from them in the past and today.

The New Horizons Youth Centre charity, who received some unused produce from the company on Friday, said they were grateful for the donation.

They say the silver lining of the party cancellations is that hundreds of young people across London will be fed over the Christmas period.

The charity has seen the number of young people sleeping rough in the capital double over the past year.

“This is going to make an amazing difference because we find that Christmas time is our busiest time of year. Unfortunately, a lot of young people find themselves homeless due to a family breakdown around this time,” she said.

“There’s so much of it. We can make up food parcels for young people,” she said. “Those in shared housing or hostels can come and have some of it here or for those young people who have access to kitchens, they would value the food parcels.”

They may have lost out on swathes of business and profit, but at a time for goodwill this gesture is one that many will cherish.