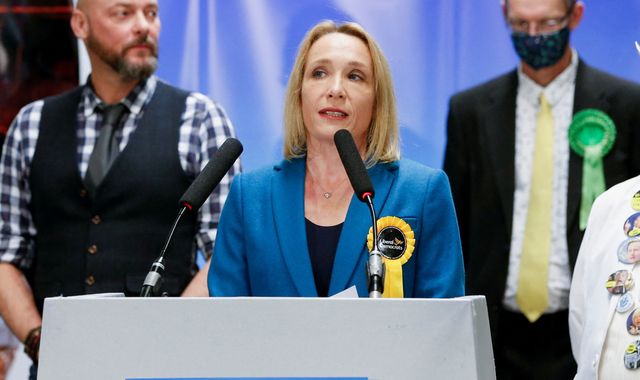 The Conservatives have lost the North Shropshire by-election, a shock result that puts more pressure on Boris Johnson after a difficult few weeks for the prime minister.

In her victory speech, the Lib Dems’ 13th MP said voters in North Shropshire have “spoken on behalf of the British people” and told Mr Johnson “loudly and clearly” that “the party is over”.

“Your government, run on lies and bluster, will be held accountable. It will be scrutinised, it will be challenged and it can and will be defeated,” she said.

Liberal Democrat leader Sir Ed Davey described the result as a “watershed moment in our politics” that “offers hope to people around the country that a brighter future is possible”.

“We’ve run a positive campaign here, I’m extremely proud of the work that everybody’s done. Of course it’s a disappointing result for us,” he told reporters when asked if the PM was to blame.

Asked if the party needs to change, he said: “We’re 11 years into a Conservative Government, by-elections are never an easy thing to do.”

Mr Paterson won the seat for the Conservatives, which has been blue since its creation in the 1980s, with a majority of almost 23,000.

Another headache for under-fire PM