COVID-19: Pandemic could go on for another 18 months but ‘each six months’ will be better than previous, Whitty says 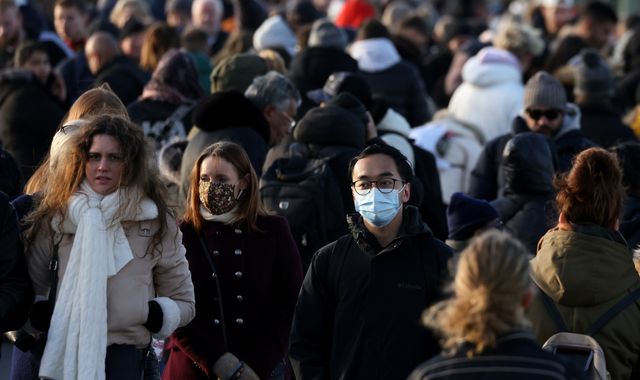 “Each six months will be better than the last six months”, England’s chief medical officer has said, as he predicted it could be “possibly 18 months” until a wide range of vaccines covers all variants of the coronavirus.

Professor Chris Whitty said it is likely that COVID vaccines and anti-viral drugs will do “almost all of the heavy lifting” when it comes to tackling future strains – unless they are “extremely different”.

He told the Commons Health and Social Care Committee: “If I project forward, I would anticipate in a number of years – possibly 18 months, possibly slightly less, possibly slightly more – that we will have polyvalent vaccines, which will cover a much wider range, and we will probably have several antivirals.”

Virus will ‘always be a problem’

He added that “each six months will be better than the last six months” when it comes to fighting the virus.

“I think what will happen is the risks will gradually decrease over time. It’s incremental, it’s not a sudden thing,” he said.

“But I think each six months will be better than the last six months. How fast that will be… it’s always dangerous to predict science.”

He said: “It’ll always be a problem, some years it will be a big problem.”

Omicron R number between 3 and 5

It comes as data found every person infected with the Omicron COVID variant is believed to be passing it on to between three and five others on average, a senior government scientist has said.

Dr Susan Hopkins, the UK Health Security Agency’s chief medical adviser, told MPs on the Commons health committee that for Omicron, the R value in the UK is between 3 and 5.

The number of cases is spreading rapidly – doubling in size every two days.

The current R value of the Delta epidemic in the UK is estimated to be between 1.1 and 1.2.

Dr Hopkins also told the hearing that reliable data on Omicron will not be available until the week between Christmas and New Year at the earliest, and may not appear before early January.

There are currently 15 people being treated in hospital with Omicron, she added.

That number needs to rise to 250 before any meaningful assessment can be made of the variant’s severity, and of vaccine effectiveness.

Dr Hopkins said measures are being taken to improve “data linkage” and new figures would be released on Thursday afternoon.

Prof Whitty, clarified: “The real number will be much bigger than that (15). That is simply the number who are proven, just to be clear.”

Omicron may peak quickly – and fall quickly too

Prof Whitty added that the “whole point” about Omicron is that it is “going to be really concentrated in a very short period of time, very possibly”.

Omicron may peak quickly, and fall away quickly too, the CMO told MPs.

“I think what we will see with this – and I think we are seeing it in South Africa – is that the upswing will be incredibly fast, even if people are taking more cautious actions, as they are.

“That will help slow it down, but it’s still going to be very fast.

“It’ll probably therefore peak really quite fast. My anticipation is it may then come down faster than previous peaks but I wouldn’t want to say that for sure. I’m just saying that that is a possibility.”

Prof Whitty also said it is “entirely possible” that the number of daily hospital admissions because of the Omicron variant could exceed the record set for COVID in January.

Committee chair, Jeremy Hunt MP, asked him if the previous peak – 4,583 – could be exceeded.

But he added that it may be fewer than that, and there are still “huge uncertainties”.

He explained: “If, for example, people stay in hospital for a shorter period, because they’re protected by prior vaccination, that means that the total number could still be lower even if the peak number per day is higher.”