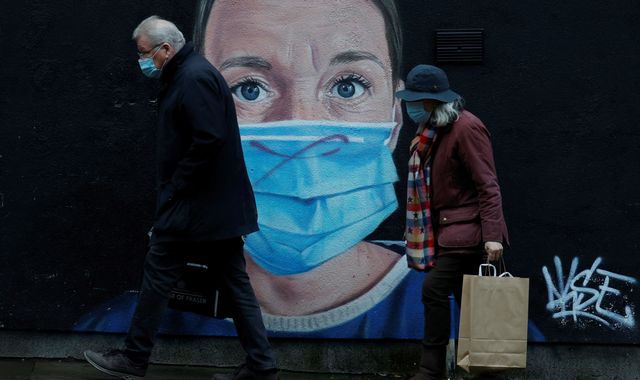 Just under one million people at high risk from COVID are still waiting for their booster, even though the rollout has now been opened up to all adults, according to analysis by Sky News.

Latest data released by the UK Health Security Agency shows that 962,252 people in England over the age of 65 had yet to receive their jab on 12 December.

These aren’t vaccine refuseniks; they have already had two doses of the vaccine.

Live updates on COVID across the UK and around the world

The latest National Flu and COVID-19 National Surveillance Report also shows 1.6 million adults under the age of 40 have already had their boosters even though they are at much lower risk.

Research shows a booster is needed to give decent protection against symptomatic infection caused by the rapidly spreading Omicron variant. Two doses give minimal cover.

Dr Simon Clarke, Associate Professor in Cellular Microbiology at the University of Reading, told Sky News: “It was inevitable that this sort of thing would happen.

“Allowing the younger and internet savvy to hoover-up appointments before older people had all had their boosters, was bound to leave a lot of people high and dry.

“This is the part of the population whose immunity is likely to have waned more and who are at greater risk of serious disease but seem to have been abandoned for the sake of politicians appearing decisive.”

The report shows there were also 3.4 million people aged between 50 and 65 yet to have a booster.

They were in the government’s top nine priority groups for the original vaccine rollout, yet they are still waiting for a top-up jab.

The risk of hospitalisation and death from COVID rises with age, with the steepest increases in those over 65.

Since Monday, anybody over the age of 18 has been able to book an appointment and clinics opened up to walk-ins from Wednesday.

A spokesperson for the Department of Health and Social Care said: “The NHS is vaccinating in line with JCVI guidance with every eligible adult now able to book as part of the country’s national mission to protect everyone from the virus.

“It remains vital that local GP teams continue to prioritise the most vulnerable groups and take every opportunity to ensure they get their lifesaving top up jab as soon as possible.”