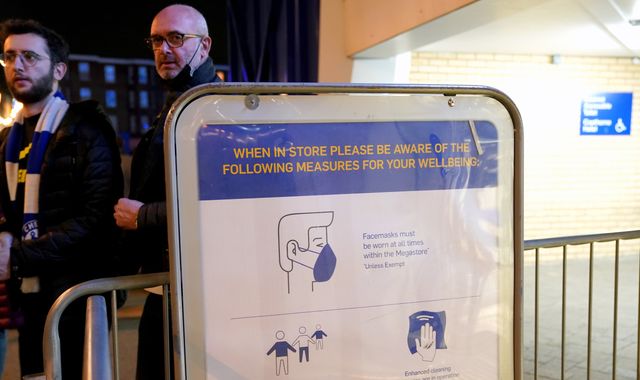 It follows five Premier League matches that were postponed within five days due to COVID-19, with one manager wanting all top-flight fixtures this weekend to be called off amid the ongoing Omicron crisis.

It comes as the latest vaccine data collated for November found that one in four European Football League (EFL) players do not intend to get the jab.

Data found 75% of players across the EFL are either fully vaccinated, have had a single jab, or intend to be vaccinated.

Double vaccinated players total 59% and 16% are set to get vaccinated.

Downing Street was unable to say whether footballers would need a Covid pass to enter stadiums following the new rules requiring proof of vaccination status or a negative test as a condition of entering some large venues in England.

When asked about EFL players not getting vaccinated, a spokesman said: “You have heard the Prime Minister talk at length about the importance of people coming forward to receive a vaccination, so he would urge absolutely everybody to come forward and receive one.”

Manchester United confirmed its game against Brighton, scheduled for Saturday, had been postponed due to a number of players and support staff in the Red Devils camp having to isolate.

Meanwhile, the Leicester City match against Tottenham, due to take place tonight, has also been postponed following further positive COVID-19 tests among the squad, which meant Leicester did not have enough available players.

Brentford’s game with Man Utd on Tuesday was also postponed.

The west London club is scheduled to face Southampton this Saturday.

And last Sunday’s match between Brighton and Spurs was also postponed.

Thomas Frank was told during a news conference today that four new positive cases had been found at his club – taking the total to 13.