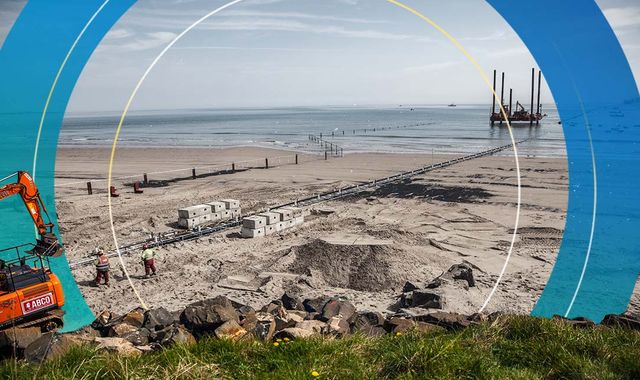 That figure is the equivalent of taking 933,100 cars off the road or planting 2 million trees, according to the National Grid.

The data, shared exclusively with Sky News, covers January to September, so the overall amount for 2021 is likely to be much greater.

Interconnectors “have a huge impact” as we transition to a renewable power system, said Duncan Burt, chief sustainability officer at the National Grid.

As renewable energy is hard to store, these cables help avoid excess power going to waste by allowing it to flow to another country.

If the wind doesn’t blow in Scotland one day, the UK can power the grid with wind from Germany or even solar from Spain, instead of firing up gas. In turn the UK can sell power to the continent on really windy days.

The National Grid has five interconnectors, effectively plugging the UK’s power grid into those in Norway, Belgium and the Netherlands, with two more to France. The “Viking Line” is set to link the UK with Denmark from 2023.

Norway’s is “really important” because of its significant hydropower, which is very flexible, said Mr Burt.

“Norway will basically act as Europe’s battery. When we’ve got high renewables, we’ll send it to Norway and they’ll use that power, or they’ll use it to pump water and store the energy in the hydro power stations.

“And then when when we need power in the UK, the power will flow back from Norway to the UK,” he said.

Roz Bulleid from green think tank Green Alliance said that while the UK has made great strides in cleaning up its power, “we still need to kick gas plants off the grid and increase the rate at which we switch our cars and heating from gas to electricity”.

The National Grid also revealed that the electricity grid was its greenest ever at 1pm on Monday 5 April, with the lowest amount of carbon emitted per unit of power.

Mr Burt said this was likely due to Atlantic storms continuing to power wind turbines, and solar power ramping up and demand dropping as the days got longer and warmer.