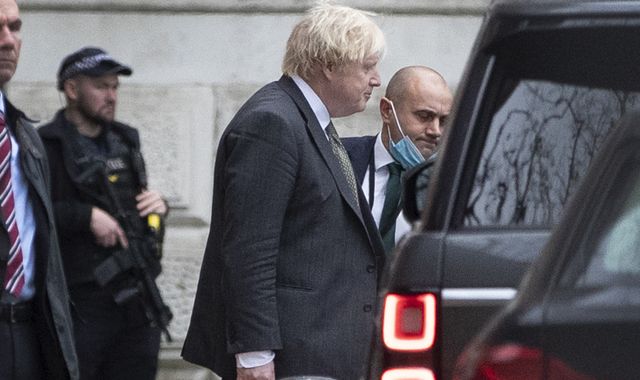 Boris Johnson has said he takes “personal responsibility” after his Conservative Party lost the North Shropshire by-election in a shock result that has dealt another significant blow to his premiership.

Speaking to broadcasters following the result, the prime minister said: “I am responsible for everything the government does and of course I take personal responsibility.

Almost immediately after accepting responsibility for the by-election result, the PM proceeded to list other reasons beyond his control that led to the surprising defeat.

Asked which things going wrong under his watch were to blame for the loss, the PM told broadcasters that “what the people have been hearing is just a constant litany of stuff about politics and politicians and stuff that isn’t about them and isn’t about the things that we can do to make life better”.

The PM added that he needed to “fix” issues like the reported Number 10 parties and the funding of the refurbishment of the Downing Street flat.

“I think my job is to get over what we’re doing more effectively and to show people that, as a result of the fastest vaccine rollout and the fastest booster rollout in Europe, that we’ve got more jobs than before the pandemic began,” he said.

“I’ve got to put my hands up and say ‘have I failed to get that message across in the last few weeks? Has it been obscured by all this other stuff?’ Yes, I’m afraid it has.”

Asked if he would resign if it was in the interest of the Conservative Party, Mr Johnson deflected the question and said he was focused on fighting COVID-19 and “getting the job done”.

Minister admits Conservatives got ‘a kicking’

Conservative co-chairman Oliver Dowden earlier admitted that his party had been given “a kicking”, telling Sky News that voters in North Shropshire wanted to send “a message” that “we have heard that loud and clear”.

Meanwhile, veteran Tory MP Sir Roger Gale warned the prime minister that he has “one more strike” left after a series of setbacks in recent weeks.

Some Conservative MPs pin blame on the PM

Sir Roger Gale said the Tories’ North Shropshire by-election defeat should be seen as a “referendum” on Mr Johnson’s premiership and described it as “not a happy day for the prime minister”.

“I thought it was highly likely that this would happen. I do not want to detract from Helen Morgan’s very considerable victory, but this wasn’t a vote for the Liberal Democrats, this was, effectively, a referendum on the performance coming out of Downing Street at the moment,” he told Sky News.

“We have had two strikes – first of all, the Conservative Party in the House of Commons earlier this week, now this result. One more strike and I think he is out.”

Sir Roger also confirmed he has already written a letter to the Conservative 1922 Committee of backbench MPs but does not know how many more of his colleagues have.

“I would not be a bit surprised if people didn’t start to write some of those letters,” he told Sky News.

He added that it is “quite possible” that “there might be a protest vote” in the Southend by-election in the New Year – despite both Labour and the Liberal Democrats agreeing not to stand due to the circumstances of former MP Sir David Amess’ death.

“This is not a happy time for the prime minister, I am afraid.”

Fellow Conservative Sir Geoffrey Clifton-Brown said Mr Johnson needs to “go away for Christmas, come back in the new year, deal with these self inflicted own goals and then start to deliver on the really biggest issues for the country that the electorate want”.

Mr Clifton-Brown told Sky News he is giving the prime minister “the benefit of the doubt” at the moment, but stressed he must “work out how he can conduct himself and govern this country in a way that avoid these sorts of issues”.

Another Tory MP, Sir Charles Walker, told Sky News has been a “really, really rocky” past six to eight weeks weeks for Mr Johnson, adding that while “the PM drives me wild sometimes, he can have me frothing at the mouth” he is doing a good job “in the main”.

Earlier this week, 100 of the prime minister’s own MPs rebelled over COVID passes, by far the biggest mutiny of his premiership.

But speaking to Sky News on Friday morning, Mr Dowden told Sky News that the PM is still an “electoral asset” to the Conservative Party and has the “drive and determination” to lead.

He added that while he does not know how many letters of no confidence may have been submitted to the Conservative 1922 Committee, he still has “every confidence” in Mr Johnson.

“Just take the three really big calls we’ve faced. Get Brexit done: he’s delivered on it. We’ve delivered the fastest booster programme in the world twice over and we’ve seen the economy through this terrible period, with unemployment lower than when we entered,” he said.

In Mrs Morgan’s victory speech, the Lib Dems’ 13th MP said voters in North Shropshire have “spoken on behalf of the British people” and told Mr Johnson “loudly and clearly” that “the party is over”.

Mrs Morgan later used a yellow pin to pop a large blue balloon which had “Boris’ Bubble” emblazoned on the side.

He said many people who voted for his party in North Shropshire were individuals who “played by the rules, who used to vote Conservative”.