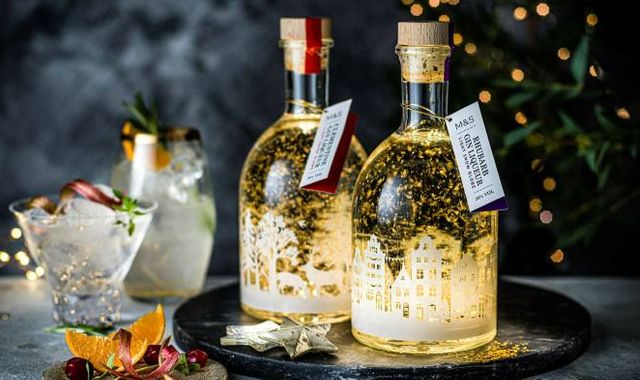 Marks & Spencer is suing Aldi for allegedly copying its Light Up gin, just months after the retailers’ Colin the Caterpillar row.

It lists several features it says are protected – such as the bottle shape, an integrated light feature, gold leaf flakes and a winter forest graphic.

Both gins come in a bell-shaped bottle with a light in the base that highlights edible golden flakes floating inside.

In Marks’s intellectual property claim, it says customers were misled to believe the two gins were of the same standard, allowing Aldi to “ride on the coat-tails” of its reputation with the product.

It wants an injunction to stop Aldi committing any further alleged infringements of its protected designs.

M&S also wants Aldi to destroy or hand over any product that may breach the injunction, as well as an investigation into potential damages.

While some might say imitation is the highest form of flattery, M&S has shown it’s not shy to take action if it believes a line has been crossed.

In April, it sued Aldi over its Cuthbert cake, alleging it was too similar to its well-known Colin the Caterpillar cake.

The disagreement produced the viral #FreeCuthbert movement, driven by Aldi on Twitter, which divided many cake lovers into team Colin or team Cuthbert.

In response to the latest case, a M&S spokesperson said the firm knew the “true value and cost of innovation and the enormous time, passion, creativity, energy and attention to detail, that goes into designing, developing and bringing a product to market”.

They added: “Our customers have confidence in our products because they trust our quality and sourcing standards so we will always seek to protect our reputation for freshness, quality, innovation and value – and protect our customers from obvious copies.”

Aldi responded on Twitter, saying: “Our lawyers gonna be so rich they be shopping in @marksandspencer soon #FreeCuthbert #Round2”.