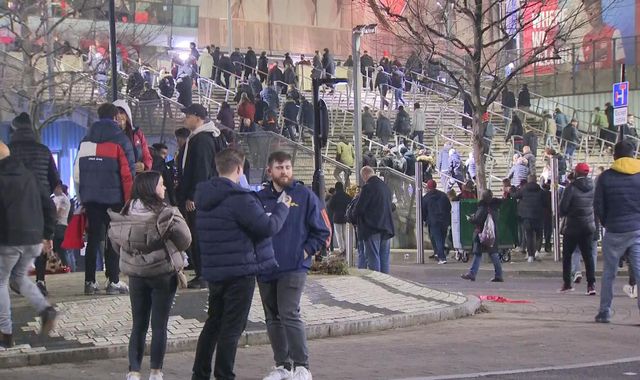 COVID passes were in force for the first time at the Emirates Stadium last night, but you wouldn’t have known it.

There were no queues and no complaints.

“Very easy” is how Arsenal fan Ismail Cakir described the new requirement, as he fired up the NHS app on his smartphone.

“It sounds annoying but I believe it’s necessary,” he told Sky News.

Whitty to be questioned by MPs on Omicron; a million could be isolating with COVID on Christmas Day – live COVID updates

To gain entry to the stadium, fans had to show proof of either double vaccination or a negative COVID test within the last 48 hours. Matt and Alana Taylor had both.

“I think we’re heading for a lockdown so we need to get everything in as quick as we can,” said Matt, in between bites of his pre-game burger.

The couple both work in social care and said they’ll continue going to football matches “for as long as we’re allowed” despite supporters being urged to stay away from stadiums by Dr Nikki Kanani, medical director of primary care for NHS England.

“Being around lots and lots of people is far more dangerous [than not going to football matches] but you’ve got to have a balance, haven’t you, between keeping safe and your mental health and your wellbeing,” Matt said.

But mention Christmas and the conversation is immediately more cautious.

Alana and Matt have made their festivities “a lot smaller” in light of the surge in cases, socialising with one family at a time rather than mixing too many households.

Georgia Sparks, 24, and her boyfriend Reece Lynn, 27, have similarly pre-empted the advice of Professor Chris Whitty to “prioritise” social events in the run-up to 25 December. Last night’s match was their last outing for the next 10 days.

“We’re just going to lay low in the run-up [to Christmas],” said Georgia, who was at a match for the first time.

Had it not been for the visit of Georgia’s friend from America, they wouldn’t have left home last night either.

“I am a little nervous but I think when we’re in [the stadium] it’ll be okay. Keep the mask on, outside, so hopefully it’ll be okay,” Reece said.

There are no legal limits on crowd sizes, though, and no new restrictions. As such, not everyone feels the need to change behaviour.

“We’ve got to get on with things,” Ray Naidoo told Sky News.

A red-and-white striped Arsenal scarf draped across his shoulders, Ray said he’s planning to socialise “a little bit” in the run-up to Christmas but won’t change his plans “unless the advice changes”.

The advice may not have changed but the language used by scientists, and the context in which it’s based, have dramatically shifted.