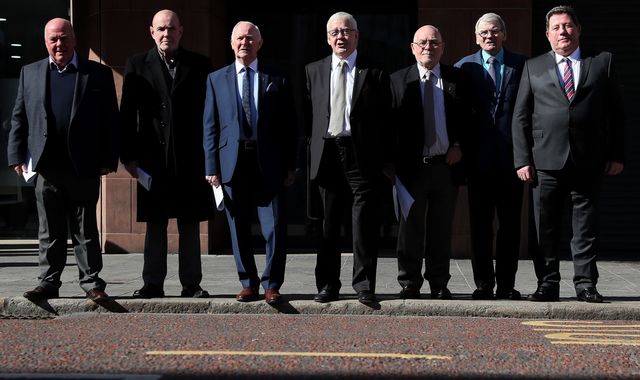 The Supreme Court has ruled that a decision by the Police Service of Northern Ireland (PSNI) not to investigate 50-year-old allegations of torture in the so-called ‘Hooded Men’ case was unlawful.

A solicitor for 14 men, who claim they were singled out for ill-treatment when detained without trial in 1971, described it as a “landmark victory”.

Darragh Mackin said: “It was always clear that the initial investigation by the PSNI was nothing more than a window-dressing exercise which only sought to pay lip service to the term ‘investigation’.”

The 14 men were among 350 people arrested by the British Army under Operation Demetrius in August 1971, when violence was spiralling out of control in Northern Ireland.

Interned without trial at Ballykelly Army Camp in Derry/Londonderry, they claim they were hooded, viciously beaten and even thrown from low-flying helicopters, which they believed were flying at height.

They allege they were placed in stress positions, subjected to continuous loud noise and denied food, water and sleep, treatment judges in Northern Ireland ruled would amount to torture today.

‘I hope the findings will provide an independent investigation’

Ahead of the judgment, one of the men, Francis McGuigian, said: “I hope the Supreme Court’s findings will provide the independent investigation I have waited 50 years for.

“The judgment will not only be significant for me, but it will matter to every torture victim, past, present and future.”

It has been one of the longest-running and most controversial cases in Northern Ireland with the European Court of Human Rights first ruling in 1978 that the UK had engaged in “inhuman and degrading” treatment.

The latest development coincides with government plans to introduce a statute of limitations on historical prosecutions, an effective amnesty for both military veterans and terrorists.

Grainne Teggart, Northern Ireland Campaign Manager for Amnesty International, who supported the men, said: “Judgment comes as the UK government seeks to betray every victim of the troubles by closing down the exact type of investigation sought – the stakes could not be higher.”

“We recognise the difficult realities that victims, families, friends and broader society continue to deal with as a result of our troubled past.

“We will now take time to study today’s judgment around these complex legacy issues in detail and we will carefully consider its implications for future legacy investigations.

“If we are to build a safe, confident and peaceful society, then we must find a way of dealing with our past and we are committed to playing our part in that process.”

Share
Facebook
Twitter
Pinterest
WhatsApp
Previous articleCOVID-19: Carlisle United limits fans in ground to 9,999 to avoid Plan B rules – despite not getting that many all season
Next articleInflation hits 10-year high as fuel, fashion and food prices surge