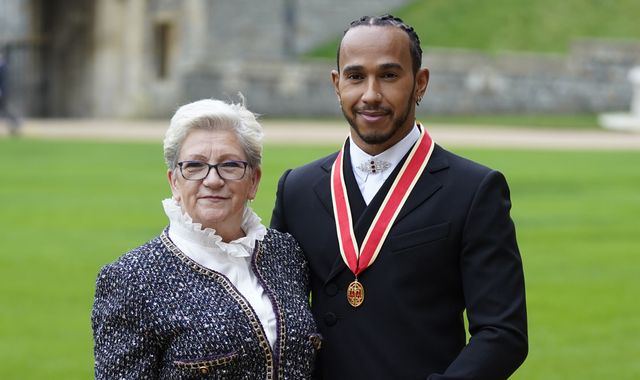 Sir Lewis Hamilton has been knighted at Windsor Castle, just days after missing out on a record eighth title.

He was joined by his mother, Carmen Lockhart, as Prince Charles performed the ceremony.

They later posed in the castle’s quadrangle for pictures but Sir Lewis, 36, did not talk to reporters.

He is the fourth F1 driver to be knighted, following Sir Jack Brabham, Sir Stirling Moss and Sir Jackie Stewart – and the first to be awarded the honour while still competing.

Sir Lewis was included in the New Year Honours list after a record-breaking year in which he beat Michael Schumacher’s number of race wins and equalled the German’s seventh world title.

On Sunday, his latest season came to a disappointing conclusion, however, when he lost a controversial one-lap shoot-out in Abu Dhabi to Max Verstappen.

Sir Lewis told Sky Sports at the time: “Congratulations to Max and his team. I think we did an amazing job this year. Everyone back at the factory and here worked so hard in this most difficult of seasons.”

Barry Hearn, who chairs the World Snooker Tour and the Professional Darts Corporation, was made an OBE for services to sport.

Singer Craig David was made an MBE.