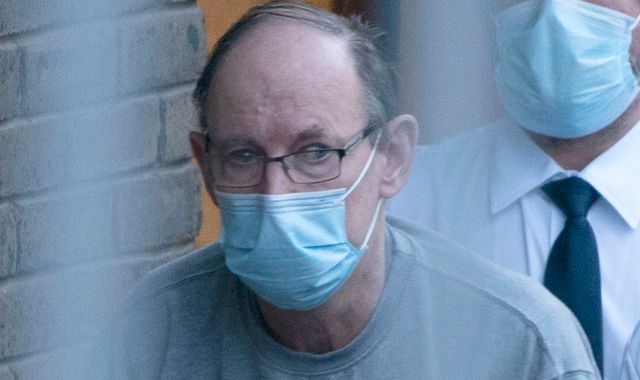 Depraved sex killer David Fuller will spend the rest of his life in jail for murdering two women and sexually assaulting dozens of corpses in a hospital mortuary.

The 67-year-old hid his crimes for more than three decades until advanced DNA techniques identified him as the killer of two young women in Tunbridge Wells, Kent, in 1987.

Only then, after his arrest a year ago, did detectives discover the true horror of his other sex offences.

Warning: This article contains descriptions that some readers may find distressing

At the hospital where he worked as a general maintenance engineer Fuller used his access-all-areas swipe card to enter the morgue and sexually penetrate the bodies of females who had died in accidents, on the wards or in the operating theatre.

Police believe he violated up to 100 corpses, from a nine-year-old girl to a woman of 100 – but they could only identify 78 of his victims.

Fuller, a keen amateur cameraman, had photographed and filmed himself performing the sex acts and catalogued the images in what one detective called his “diary of debauchery”.

He began recording his sordid crimes in 2008, but had worked at the Tunbridge Wells Hospital – and its predecessor the Kent and Sussex Hospital – since 1989, so detectives fear he may have assaulted hundreds more bodies.

Kent Police had to enlist more than 300 family liaison officers from more than half of the UK’s forces to break the news to the relatives of the deceased.

Some have called for the resignation of Miles Scott, chief executive of the Maidstone and Tunbridge Wells NHS Trust which runs the hospital that employed Fuller.

Quiet and well-liked by his colleagues, Fuller had unsupervised access to the mortuary and attacked corpses in a section of the autopsy room not covered by security cameras. He also worked late shifts that meant he was alone in the area for around three hours a day.

After Fuller admitted all his crimes, midway through a trial last month, Health Secretary Sajid Javid ordered a public inquiry into the case and whether anything could have been done to stop him.

Fuller, who has a son and daughter, had initially admitted the hospital attacks and denied murder – but he pleaded guilty to the two murders on the sixth day of the trial at Maidstone Crown Court.

His first murder victim was Wendy Knell, 25, the manager of a SupaSnaps store in Tunbridge Wells where Fuller took his photographs to be developed.

Her boyfriend found her naked body in the blood-stained bed of her bedsit in the town in June, 1987. It was her father Bill’s birthday. She had been sexually assaulted and strangled.

Her widowed mother Pam Knell, 84, told Sky News: “I remember the phone call from the police. And then I had to tell my husband to go over, to sort it out. It was mad. I don’t know.”

She said: “I didn’t remember for a long time. I used to find myself at the bottom of the garden in the middle of the night, by myself, crying my eyes out.

“Wendy was a lovely, spirited girl and a good daughter. She had just started a new life, living away from us, but she didn’t have much of one, did she?

“I never thought they would catch him and I was frightened of any man coming close to me. I hope he is locked up for a long time. At least he won’t be able to do it again if he’s in prison, will he?”

Five months after killing Wendy, Fuller abducted Caroline Pierce, aged 20, outside her bedsit home. She was a waitress at Buster Brown’s restaurant, which he had visited.

Her body, naked apart from a pair of tights, was discovered by a farm worker in a flooded drain 40 miles away in Romney – an area Fuller knew from cycling trips.

The murder squad investigated for many weeks, but forensic samples were poor and with no established DNA database to help identify the killer, the operation was scaled back.

What became known as ‘the bedsit murders’ remained unsolved, even though the DNA sample from Wendy’s body was enhanced by forensic scientists in 1999.

In 2019 a reinvestigation was boosted by an enhanced DNA sample from Caroline’s tights, though the breakthrough came from the sample from Wendy’s body.

Checks on the national DNA base, which was set up in 1995, showed a close match to 90 people and gradually detectives were able to whittle down the numbers and identify a relative of Fuller, and then Fuller himself.

When police called on him at his home in Heathfield, East Sussex, he denied knowing the two women and the town Tunbridge Wells, but he was arrested and his DNA matched the killer’s. His fingerprint matched one in blood on a plastic bag found in Wendy’s bedsit.

Fuller’s third wife Mala, who was a nurse at the hospital, was in court in October with his son and brother and others when the full details of his crimes were revealed. One woman was shaking and in tears, another left the courtroom visibly distressed.

Mala Fuller, 50, later told MailOnline: “I’m not with him. I couldn’t carry on in that relationship. I’m too upset to even think about what was going on, I couldn’t live with it. You can’t imagine how distraught I am.”

When police searched the couple’s home they found 14 million images and four million videos in his office and loft which took months to sort through. There were 100 hard drives, 2,200 floppy discs, 30 sim cards and mobile phones, 1,300 CDs and DVDs, and 34,000 photographic prints, slides, negatives and film rolls.

Mr Fuller had labelled the hard drives with names of some victims and had also kept a notebook in which he recorded their names. Some of the images also revealed the time and date they were taken, which helped to narrow down the possible victims.