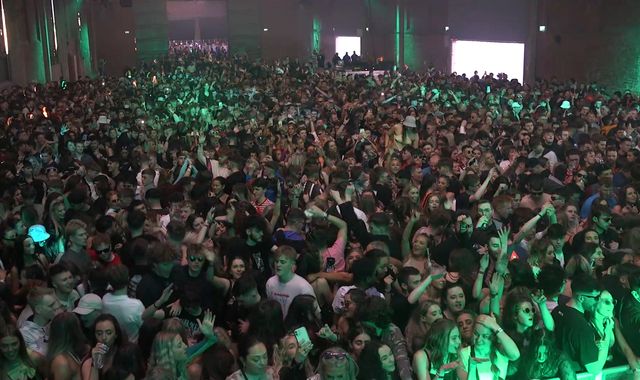 Adults must now show a COVID pass to enter nightclubs and other large events in England.

The new measures coming into force today require proof of double-vaccination or a negative PCR or lateral flow test result within the last 48 hours for those attending some venues.

The rules apply to nightclubs, indoor unseated venues with a capacity of more than 500 people, unseated outdoor venues that hold more than 4,000 people, and any venue with more than 10,000 people.

To prove their status, people can use the NHS COVID Pass app, or a text message or email from NHS Test and Trace.

Nightclubs said they have already lost income in the run-up to the rule change.

"It’s completely messed the market up," said Stuart Glen, co-founder of The Cause nightclub. "People’s confidence has gone."

He told Sky News: "I think we are unfairly targeted, to be honest."

The new restrictions coincide with the expansion of the vaccination programme, with all adults in England and Scotland now able to book their coronavirus booster jab appointment.

People are eligible for a third dose three months after their second vaccine.

Appointments can be booked one month in advance.

The race is on to vaccinate as many people as possible after the prime minister set a target of offering all adults a booster by the end of the month to mitigate the impact of the Omicron variant.

Dr Emily Lawson, head of the COVID-19 vaccination programme in England, said the NHS "is once again pulling out all the stops to protect the country from this cruel virus".

She said staff are "working flat out" to set up more sites and make extra appointments available.

Health Secretary Sajid Javid said: "We are turbocharging the vaccine rollout to ensure as many people as possible can get boosted now as we continue our fight against the Omicron variant."

It comes after all 11 countries on the UK’s travel red list are set to be removed this morning – meaning arrivals will no longer have to isolate in a government-approved quarantine hotel for two weeks at a cost of £2,285.

It was later confirmed that those currently in hotel quarantine will be allowed to leave early, as long as they don’t test positive for COVID. A further update on the end of quarantine in hotels is expected later today.

The use of COVID passes was approved in parliament on Tuesday despite a rebellion from 100 Conservative MPs.

A majority of MPs also voted for the continuation of mask-wearing in most public indoor venues in England and the relaxation of self-isolation rules for those who are a contact of an Omicron case, with the use of daily testing instead.

Labour leader Sir Keir Starmer said the Tory rebellion was "a very significant blow to the already damaged authority of the prime minister".

"It confirms that he’s too weak to discharge the basic functions of government," he added.

Coronavirus passport schemes are already in effect in Scotland, Northern Ireland and Wales.