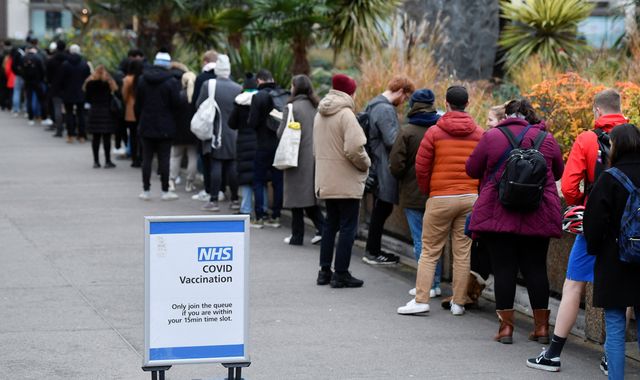 The rapid spread of the Omicron variant will lead to a “staggering” number of COVID cases over the next few days, Dr Jenny Harries has said.

While delivering a series of dire warnings about the strain to MPs on Wednesday, the chief executive of the UK Health Security Agency (UKHSA) said it was probably too early to tell how serious the scale of increasing infections across the world would turn out to be.

Dr Harries told the Commons Transport Committee that the variant was “probably the most significant threat we’ve had since the start of the pandemic”.

“The numbers that we see on data over the next few days will be quite staggering compared to the rate of growth that we’ve seen in cases for previous variants,” she said.

“The real potential risk here – and I would underline that because we are still learning a lot about the variant – is in relation to its severity, clinical severity, and therefore whether those cases turn into severe disease, hospitalisations and deaths.

“The difficulty is… the growth of this virus, it has a doubling time which is shortening – ie it’s doubling faster, growing faster.”

Dr Harries also warned of an “unprecedented demand” for testing, before adding that the UK was prepared for winter but not for the new variant.

She told MPs that “we have more PCR tests coming on board” and that “there are tests available”.

She also said that London testing sites “were quite full” on Tuesday, but that people can still order home tests.

“We do still have sufficient tests, both for PCRs and LFDs (lateral flows),” she said.

Dr Harries said reinfection rates from Omicron were “much higher” than has been seen in previous variants.

She also warned that the NHS could be in “serious peril” because of the Omicron wave.

Defending the testing regime for travel to MPs, Dr Harries told the Commons Transport Committee: “Trying to prevent ingress of any infections, including Omicron, still remains a key point, particularly when we can foresee a very large wave of Omicron coming through and our health services potentially being in serious peril”.

She added that “travel restrictions have a time and place”, saying that placing restrictions on countries which had high rates of Omicron at a very early stage worked as “a delaying tactic” to give the UK “time to prepare, to understand, to boost particularly our population”.

On the strict testing regime, Dr Harries said: “Where we know there are cases coming into the country, it seems prudent to try and prevent them from transmitting onwards”.