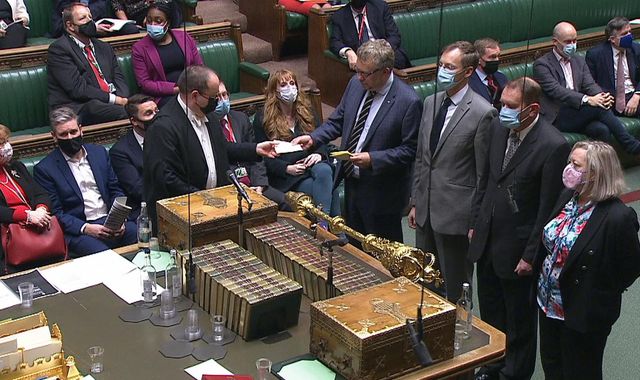 Boris Johnson has suffered the biggest Conservative rebellion since the 2019 general election as 100 Tory MPs opposed the introduction of COVID certificates for nightclubs and large events in England.

In a House of Commons vote that immediately raised further questions over the prime minister’s leadership, more than a quarter of Tory MPs opposed a key measure of Mr Johnson’s “Plan B” for dealing with COVID infections this winter.

However, despite the large Conservative rebellion, the Commons approved the tougher COVID restrictions for England in the wake of the discovery of the Omicron variant, as Labour supported the government’s new measures.

In a series of Commons votes on Tuesday night, a majority of MPs approved:

• The extension of mandatory face mask-wearing to most public indoor venues in England
• The mandatory use of the NHS COVID pass for entry into nightclubs and large events
• The relaxation of self-isolation rules for those who are a contact of an Omicron case, with the use of daily testing instead
• Compulsory COVID vaccinations for frontline NHS and social care staff

Mr Johnson, who was already facing Tory anger over allegations of Christmas parties in Downing Street last year in breach of COVID rules, will be further buffeted by the size of Tuesday night’s rebellion.

The Tory revolt against COVID passes, which came from among a variety of factions within the Conservative Party, was larger than most pre-vote estimates.

And it even included the Commons’ newest Conservative MP, Louie French, who recently won the Old Bexley and Sidcup by-election.

Mr French later explained that he had made “a clear pre-election pledge that I would not support COVID passes for our domestic economy and voted accordingly”.

But Sir Desmond Swayne told Sky News he had also voted against the government and had emailed parliamentary officials to point out their error in listing him as having not voted.

The breaking of the Tory whip by 100 MPs came despite Health Secretary Sajid Javid having earlier attempted to ease their concerns about the use of COVID passes in England.

Mr Javid promised that, as well as proof of COVID vaccination, evidence of a negative lateral flow test would also “always” be sufficient for entry to events under the COVID pass scheme.

Mr Johnson had also addressed an emergency meeting of the influential 1922 Committee of Conservative backbenchers as he made a last-ditch effort to prevent a big split within Tory ranks on the new coronavirus rules.

Senior Conservative MP Sir Geoffrey Clifton-Brown, who was among the rebels, said the Commons revolt represented a “major division” within the Tory party.

“Now the prime minister has really got to think very carefully about how he’s going to reset his performance to actually govern with a united party, because we all know what happens to disunited parties,” he told Sky News.

Sir Geoffrey suggested some Tory MPs would be thinking “we’ve got to have a change” after a “bad month”, but added he personally had not yet lost faith in Mr Johnson.

What are the vaccine certificate rules MPs have voted for?
How did your MP vote?

Mark Harper, a former Tory chief whip and one of the leading Conservative critics of mandatory COVID passes, told Sky News that Tuesday’s vote sent a “clear message” that Conservative MPs wanted a “change of approach” from the government.

“It’s been a complete shambles, it’s been handled really badly and the prime minister absolutely has got to do better and can do better,” he told Sky News.

Labour leader Sir Keir Starmer said the Tory rebellion was “a very significant blow to the already damaged authority of the prime minister”.

“It confirms that he’s too weak to discharge the basic functions of government,” he added.

“These public health measures would not have gone through if Labour hadn’t shown the leadership – that the prime minister failed to show – by voting in the public interest.

“That’s what we did and it was because of our votes that these measures went through.”

Sir Keir called on Mr Johnson to “take a long, hard look at himself and ask himself whether he has the authority to take this country through the pandemic”.

Responding to the rebellion on Sky News on Wednesday morning, Transport Secretary Grant Shapps said: “I do appreciate that every MP has to think very carefully. And look, as a Conservative, I hate the idea of curtailing people’s freedom to act and to do different things.”

Asked if the PM will have “lost the dressing room” if the Conservative Party do not win the North Shropshire by-election on Thursday, Mr Shapps added: “Governing is difficult – especially with something like coronavirus – there is no textbook, there is no manual to work through.

“In Parliament, all sorts of things happen, we will wait and see.”

Ministers’ response to the discovery of the Omicron variant had initially centred on new travel restrictions to stop its spread, but the travel red list has been cleared now that there is community transmission of the new strain within the UK.

The prime minister has also accelerated the booster vaccine rollout in a bid to combat the impact of Omicron, with more than 500,000 people receiving their extra doses on Monday.

Following the Commons votes on Tuesday, health minister Gillian Keegan admitted that “making decisions about restrictions during COVID has been incredibly difficult”.

“Making decisions now when we’ve only got partial information [about Omicron] has just made that really much, much tougher,” she said.

“But we have decided that we need to buy time, we really do need to slow down this unbelievably transmissible virus so we can get everybody vaccinated and boostered.”

“I know this will not be easy, I know that you are tired and weary,” Mr Johnson wrote. “But you know how critical it is that we get Britain boosted, and fast.”

Government sources said that, should further COVID restrictions be required in the coming weeks, then MPs would be given a further vote in the Commons on possible new rules – even if it meant recalling parliament from its Christmas recess.