‘Big numbers’ of COVID patients in hospital after Xmas due to ‘phenomenal’ Omicron spread, warns Whitty 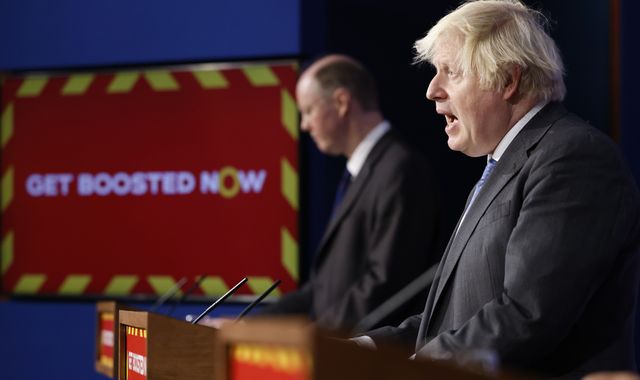 Large numbers of COVID patients ending up in hospital is a “nailed on prospect” as the Omicron variant spreads at an “absolutely phenomenal pace” across the country, England’s chief medical officer has warned.

On Wednesday, the UK recorded its highest number of daily COVID cases since the start of the coronavirus crisis, with 78,610 fresh infections.

Prof Whitty said that daily COVID case records “will be broken a lot over the next few weeks as the rates continue to go up”.

And he also warned that these would translate into “big numbers” being treated in hospital in the coming weeks.

“I’m afraid there will be an increasing number of Omicron patients going into the NHS, going into hospital, going into intensive care,” Prof Whitty said.

“The exact ratios we don’t yet know, but there will be substantial numbers and that will begin to become apparent, in my view, fairly soon after Christmas.

“It will start before then but, in terms of the big numbers, I think that’s a reasonably, I’m afraid, a reasonably nailed on prospect.”

Prof Whitty said the UK faced “a really serious threat at the moment” and suggested that Britons should “deprioritise” certain social contacts.

He added there were “several things we don’t know” about the Omicron variant, but warned: “All the things that we do know are bad.”

“The principal one being the speed at which this is moving,” Prof Whitty said. “It is moving at an absolutely phenomenal pace.”

Prof Whitty suggested there were “two epidemics on top of one another” following the spread of the Omicron variant.

The 78,610 COVID cases recorded on Wednesday was over 10,000 more than the previous daily record of 68,053 infections, which was reported on 8 January this year.

A further 4,671 cases of the Omicron variant were also confirmed on Wednesday, almost doubling the total in the country and bringing it to 10,017.

On Wednesday, a further 165 deaths within 28 days of a positive coronavirus test were reported. This time last week, 161 deaths were recorded.

In the latest 24-hour period where figures are available, another 774 COVID patients were admitted to hospitals in the UK – with the total now 7,673, including 896 on ventilators.

This is slightly up from the same time the previous week when 738 patients were admitted.

Share
Facebook
Twitter
Pinterest
WhatsApp
Previous articleCOVID records ‘will be broken a lot over the next few weeks’, warns Whitty
Next articleReading fire: Up to five people unaccounted for after fatal blaze and it is ‘highly unlikely’ any more survivors will be found