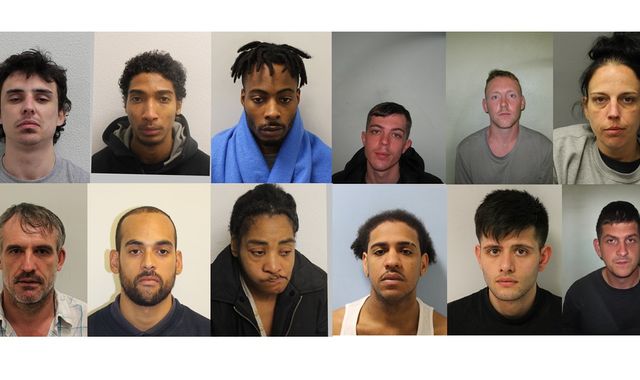 Police have launched an appeal in a bid to find 12 wanted violent offenders ahead of Christmas.

The Met released images of the suspects, who are wanted on a range of offences – including robbery, grievous bodily harm (GBH) and recall to prison.

They are all classed as “high harm” offenders, since they were either wanted in connection with violent offences or they are known to have a violent background.

Superintendent Thomas Naughton said:  ”With Christmas around 12 days away, we are increasing our efforts to arrest these individuals and apprehend them for their crimes.

“These offenders have caused harm and distress to their victims and it is our priority to arrest them to prevent them from causing further offences.”

Who are the suspects?

Andrew James Claffey, 29, is wanted after being recalled to prison on 11 May following an assault he committed on 5 February 2020 in Hounslow. Police say he is also a habitual knife carrier.

Officers are also looking for Brandon St Louis, 22, who failed to appear at court on 29 July 2020 after he was arrested for being in possession of a knife in north London.

Lenin Rodriguez Jimenez, 24, is wanted on suspicion of a threat to kill on 25 May 2021 at Elephant Road in south east London. Police say he is also believed to be linked to a double stabbing.

Scotland Yard are also looking for Robert Jones, 38, over a stabbing that caused serious injury amounting to GBH on 25 January 2020 on Shalfleet Drive in west London.

Christopher Jeremiah, 29, is named in the appeal for possessing an offensive weapon on 31 December 2019 at the Scala nightclub in Camden.

Sapphire Anderson, 41, is wanted for a recall to prison on 24 November 2021 following her original offence of robbery in North End Road, Fulham on 31 May 2019.

Officers are also appealing for information on Mohez Khan, 24, who is wanted in connection with GBH against several victims on 20 October 2019 at La Cucina in Southend Road, Camden.

They are also looking for Jaffe Otobor, 31, for threats to kill on 26 August 2021 at Northborough Road, Croydon, where he assaulted one person and chased another with a knife.

Meanwhile, Kelly Bassey, 37, is wanted on a recall to prison on 16 September 2021 following her original offence of possession of a knife, handling stolen goods and possession of Class A drugs relating to an incident in St John’s Church Yard, Hackney.

Luke Wall, 27, is named in the appeal for GBH on 10 September 2020 on Bexley Road in Erith, where he attacked his victim with a hammer.

Finally, George Page, 30, is wanted for a stabbing on 5 October 2020 at Stocker Gardens, Dagenham.

It comes amid the Met Police’s drive to arrest outstanding offenders as part of its ongoing Winter Nights enforcement activity to combat violence over the festive period.

The force said its efforts had already starting having an impact on serious violence in London, with data showing homicides had decreased by 7% – or nine fewer victims – due to their work.

According to their figures, knife crime has also fallen by 32% or 4,613 fewer offences and gun crime decreased by 38% – or 738 fewer offences.

Mr Naughton said: “We are always carrying out arrest enquiries and bringing offenders to justice so that we can keep everyone safe, but we also need the help of the public.”

The Met Police said that anyone with information was encouraged to call 101 or 999 in an emergency, or to contact the independent charity Crimestoppers on 0800 555 111.