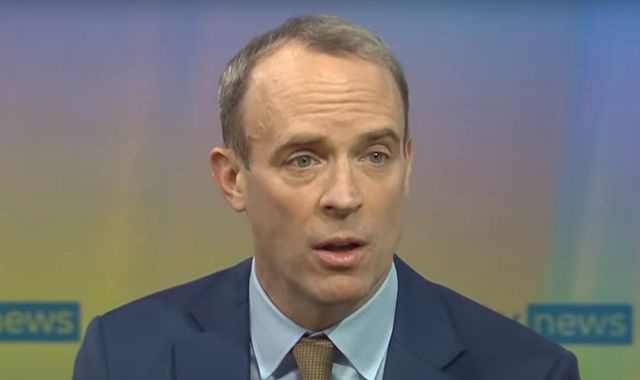 There are currently 10 people in hospital with the Omicron variant of COVID-19 – not 250, as Dominic Raab told Sky News.

But officials have clarified that Mr Raab “misspoke” on both occasions by getting his figures wrong, and that there are currently 10 people in hospital with Omicron.

He later accused another broadcaster of “ranting” after being challenged on the confusion, which comes as the government seeks to ramp up the booster vaccine programme.

Earlier this morning, Mr Raab, who also acts as justice secretary, told Kay Burley there are “a significant number” in hospital with the variant, but could not say how many are on ventilators.

In the same hour, the deputy PM revised his figure for the number of people in hospital with Omicron down from 250 to nine during his appearance on BBC Breakfast.

“I know we’ve had one death,” he said. “I think we’ve got nine people who are in hospital with it.”

Officials later clarified that this was incorrect too, and there are in fact 10 people in hospital with the new variant.

Yesterday, the health secretary, Sajid Javid, told Kay Burley that the number stood at “about 10”.

The deputy PM later accused a broadcaster of “ranting” as he was challenged over the confusion he sowed on the number of Omicron hospital admissions.

He told the presenter of ITV’s Good Morning Britain, Adil Ray: “First of all, I misheard one of the questions around whether it was hospitalisations of Omicron-related patients or more generally, but the figures are: one death from Omicron, 10 in hospital, and I can tell you the latest daily hospitalisations run at 900.”

Speaking to Sky News earlier, Mr Raab said that if the rate of transmission continues, “we will see those numbers increase very dramatically”.

“A proportion of those hospitalised will possibly die or have a very serious suffering” due to Omicron, he warned.

But he said there was currently “no plan” for more restrictions beyond Plan B.

Plan B measures are being voted on by MPs today – they include the mandatory use of face masks in some settings and the use of COVID passes for some venues.

Pressed on Christmas, the deputy PM said: “I think people can go into this Christmas, enjoy it, and we’ve got an opportunity to spend time with loved ones in a way that we didn’t last year.

His comments came as modelling from the UK Health Security Agency (UKHSA) suggested Omicron is currently infecting 200,000 people a day across the UK.

Speaking in the Commons on Monday, Mr Javid said the COVID variant now represents more than 20% of coronavirus cases in England.

The health secretary added that Omicron, which is thought to be much more transmissible than previous variants, represents more than 44% of infections in London, and it is expected to become the dominant variant in the capital “in the next 48 hours”.

He also confirmed that there are now 4.713 confirmed cases in the UK.