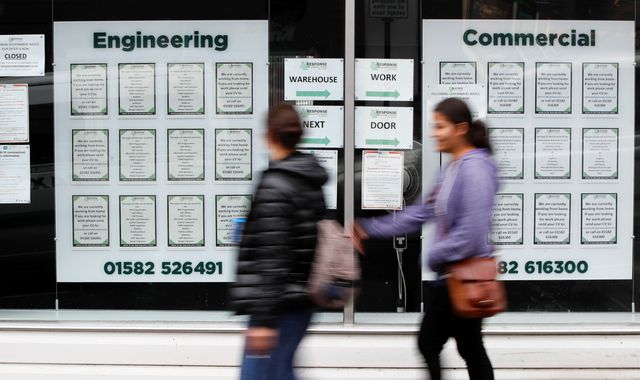 The UK’s unemployment rate has fallen while there is further evidence that the end of the furlough scheme in September did not result in sweeping job losses, according to official figures.

The Office for National Statistics (ONS) said the jobless rate fell to 4.2% in the three months to October as employment continued to recover though it remained 0.2 percentage points above its pre-coronavirus pandemic level.

The data also showed that employers added a record 257,000 staff to their payrolls in November, bolstering early signs that the labour market withstood the end of the wage support.

ONS director of economic statistics, Darren Morgan, said: “With still no sign of the end of the furlough scheme hitting the number of jobs, the total of employees on payroll continued to grow strongly in November, although it could include people recently made redundant but still working out their notice.

“The number on payroll is now above pre-pandemic levels right across the country.

“Separately, survey findings show much of the recent growth in employment has been among part-timers, who were particularly hard hit at the start of the pandemic.

“While job vacancies continue at record levels, the number is not growing as fast as it did earlier this year.”

The latest figures were released against a backdrop of warnings from business that the UK’s employment recovery from the worst of the COVID crisis to date was being placed at risk by the latest public health measures.

The Confederation of British Industry (CBI) raised fears of “lockdown by stealth” as working from home guidance began in England.

The PM and devolved administrations have refused to rule out tougher restrictions to curb the spread of the Omicron variant.

It is uncertainty over the impact on the economy in the weeks ahead which is tipped, by economists, to force the Bank of England’s hand this Thursday and keep interest rates at their record low of 0.1%.

Rate-setters are under pressure to raise the cost of borrowing to dampen inflation expectations as prices continue to leap across the economy.

But the Bank has been at pains to point out that factors such as energy costs are out of its control.

Another factor against a rate rise is slowing economic growth.

The monetary policy committee (MPC) will vote just a day after the latest inflation figures are released.

They are expected to show an increase in the consumer prices index (CPI) measure to nearer 5% from a current level of 4.2% – already more than double the MPC’s target.

The ONS data showed that average weekly earnings were 4.3% up on a year earlier in the three months to October – intensifying the squeeze on household spending power when measured against the pace of price increases.

Head of economics at the British Chambers of Commerce, Suren Thiru, warned that Plan B may damage the recovery.

He wrote: “While current labour market trends provide no barrier to raising interest rates, uncertainty over the economic impact of the Omicron variant means a December rate hike is unlikely.

“Interest rates may start rising from February 2022, but only if concerns over the new variant have faded.

“More support is urgently needed to aid those firms worst effected by Plan B, including returning VAT for hospitality and tourism back to its emergency rate of 5%, reinstating full business rates relief for these firms and making additional grant funding available.”